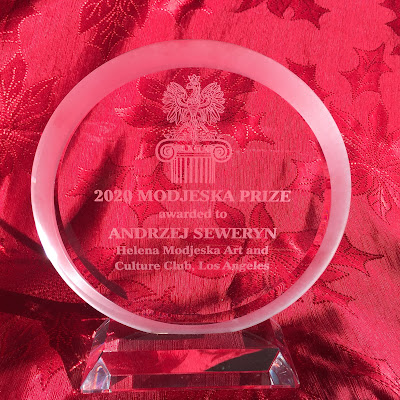 Link to the YouTube Video of the event: https://youtu.be/gXguc-S6qrg
Link to The Post Eagle article, May 9, 2021:
https://www.posteaglenewspaper.com/eminent-polish-actor-receives-2020-modjeska-prize/

It is a great honor and delight to invite you to the virtual presentation of the Helena Modjeska Prize 2020 to eminent Polish actor Andrzej Seweryn. This zoom event will take place on Saturday January 2, 2021,  at 12:30 pm The interview with our distinguished guest will be conducted by a Club member and amazing actress Katarzyna Smiechowicz. The presentation of the Prize will be from the garden of Club President Maja Trochimczyk.

Among the most successful Polish actors, Seweryn starred in over 50 films in Poland, France and Germany. The current General Director of Teatr Polski in Warsaw, he is among an elite group of only three foreigners accepted to Comédie-Française. His critically acclaimed film and theater roles gained him multiple honors and awards, such as   He visited the Modjeska Club several times, most recently in 2017, when Andy Dowen was the president, and Ewa Barsam hosted the event in her elegant residence. 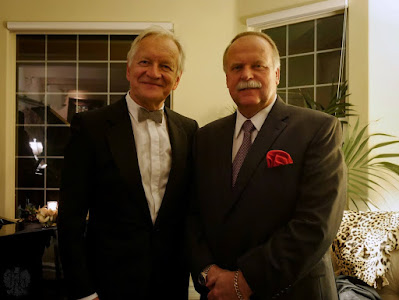 The link will be emailed to members and guests, not to be posted in public but to be shared with friends.

WHERE: Zoom Meeting by Invitation Only 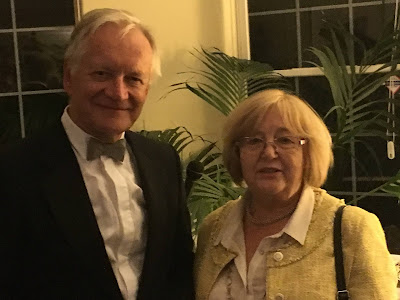 Andrzej Teodor Seweryn is one of the most successful Polish theatre actors. He starred in over 50 films, mostly in Poland, France and Germany. He is also one of only three non-French actors to be hired by the Paris-based Comédie-Française. He is currently serving as director general of the Polski Theatre in Warsaw.

The biography below is from Wikipedia. Read also his biography on the portal Culture.Pl: https://culture.pl/en/artist/andrzej-seweryn

Seweryn was was born on 25 April 1946 in Heilbronn, Germany. His parents, Zdzisław and Zofia, were captured and forced into slave labor in Germany during World War II. After the birth of Andrzej, they returned to Poland. In 1968 he graduated from the National Academy of Dramatic Art in Warsaw and worked at Teatr Ateneum where he continued to act until 1980. Already in the 1970s he gained much fame following his appearance in numerous films directed by Andrzej Wajda, notably Without Anesthesia, The Promised Land and the Man of Iron. For his role in Wajda's 1980 Dyrygent Seweryn received the Silver Bear for Best Actor at the 30th Berlin International Film Festival. In 1980 Seweryn also made his stage debut in France following the staging of Wajda's interpretation of plays by Stanisław Witkiewicz at the Théâtre Nanterre-Amandiers.

The imposition of the martial law in Poland in 1981 found Seweryn in France. A sympathiser of the outlawed Solidarity, he decided to stay abroad and settle in France. With time he also applied for French citizenship. During his stay in France he collaborated with some of the most renowned theatre directors. Among them were Claude Régy (La Trilogie du revoir and Grand et Petit by Botho Strauss), Patrice Chéreau (Peer Gynt by Ibsen), Peter Brook (The Mahabharata), Bernard Sobel (Nathan the Wise by Gotthold Ephraim Lessing, The Good Person of Szechwan by Bertold Brecht, Tartuffe by Molière), Deborah Warner (A Doll's House by Henrik Ibsen), Antoine Vitez (L'Échange by Paul Claudel), Jacques Rosner (The Cherry Orchard by Anton Chekhov and Breakfast with Wittgenstein based on a novel by Thomas Bernhard), and Jacques Lassalle (Jedermann by Hugo von Hofmannsthal and The Misanthrope by Molière). Since 1993 he has performed in Comédie Française in Paris (receiving full membership in 1995, as the third non-French in the history of that theatre) and taught at the Paris Conservatoire. In 1996 he received Witkacy Prize - Critics' Circle Award. For his contribution to French culture in 2005 was awarded with Légion d'honneur, in addition to Ordre des Arts et des Lettres and Ordre national du Mérite.

Andrzej Seweryn appeared in over fifty motion pictures, most them Polish, French and German productions. He is best known in the United States for his portrayal as Julian Scherner in the film Schindler's List. Seweryn was allegedly chosen for the role of Scherner since he bore a striking physical resemblance to the actual Julian Scherner, based upon photographic evidence from World War II. He has also portrayed the French Revolutionary leader Maximilien Robespierre, in the film and mini-series La Révolution française (1989) a.k.a. (The French Revolution). His 2006 film Who Never Lived was entered into the 28th Moscow International Film Festival. In 2016, he won the Best Actor Award at the Locarno International Film Festival for the film The Last Family. 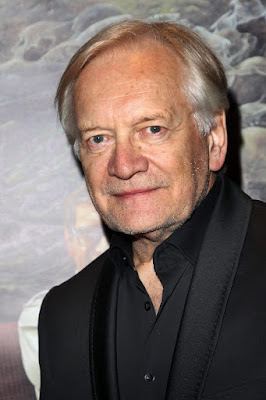 1997 – Minister of Foreign Affaris Diploma for outstanding merits to Polish culture abroad; Knight's Cross of the Order of Polonia Restituta awarded by the President of the Republic of Poland

2000 - Polish Television's award for his role in the film, Prymas / The Cardinal at the Polish Feature Film Festival in Gdansk

2001 - Golden Duck award for his role in Prymas / The Cardinal

2005 - Légion d'honneur for his contribution to French culture.

2008 – the Great Bow Award / Wielki Ukłon – an honorary award of the Quest Europe in Zielona Góra; the Commander's Cross of the Order of Polonia Restituta

2010 – the Audience Award organised by the Juliusz Słowacki Theatre in Kraków for the role in Imagine Yourself... William Shakespeare

2014 – Tadeusz Boy-Żeleński Award for outstanding performances at the Polish Theatre in Warsaw, especially in Shakespeare's plays; the Złoty Glan Award of the Charlie cinema in Łódź

2016 – the Icon of the Polish Cinema / Ikona Polskiego Kina Award for life-time achievements in acting granted at the 5th Suspense Film Festival in Kołobrzeg; Golden Leopard for the Best Actor at the 69th Locarno International Film Festival for the role of Zdzisław Beksiński in The Last Family 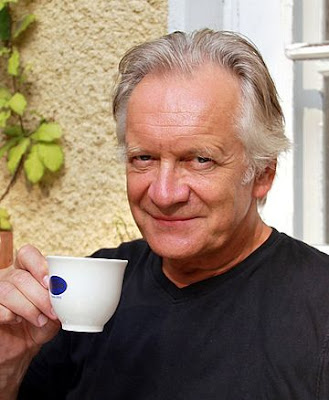 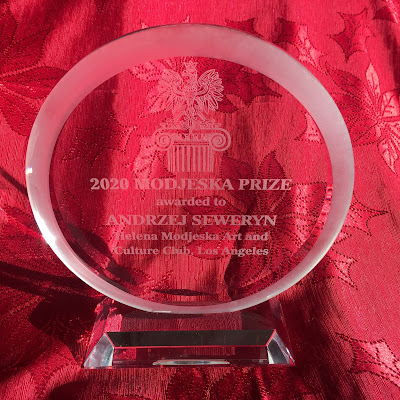 EVENT PHOTOS AND REPORT
The Board of Director of the Helena Modjeska Art and Culture Club in Los Angeles, a 50-year old Polish cultural organization in California, is delighted to present its annual Helena Modjeska Prize for the year 2020 to distinguished Polish actor Andrzej Seweryn. This presentation took place on January 2, 2021 in a virtual format, using Zoom. It included an extensive interview with the distinguished guest, conducted by a noted Club member, well-known Polish actress Katarzyna Smiechowicz. Club President, Dr. Maja Trochimczyk and Board Member Anna Sadowska presented the Prize from Dr. Trochimczyk’s California garden. 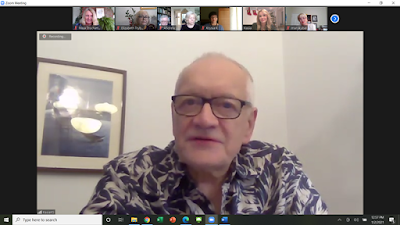 Among the most successful Polish actors, Seweryn starred in over 50 films in Poland, France and Germany. The current General Director of Teatr Polski in Warsaw, he is among an elite group of only three foreigners accepted to Comédie-Française. His critically acclaimed film and theater roles gained him multiple honors and awards, such as   He visited the Modjeska Club several times, most recently in 2017, when Andy Dowen was the president, and Ewa Barsam hosted the event in her elegant residence.  In 2003, he received the Cavalier Cross of the Order of Merit from the Polish government in a ceremony held in Santa Monica. Club President at that time, Ms. Jolanta Zych, also received this distinction from the hands of the Consul General of the Republic of Poland. At that time Mr. Seweryn was visiting California and lived permanently in France. 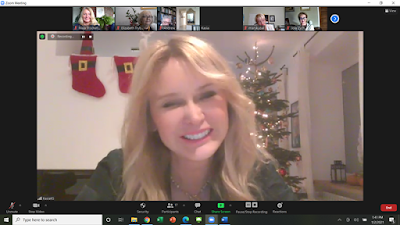 The interview was conducted by Katarzyna Smiechowicz 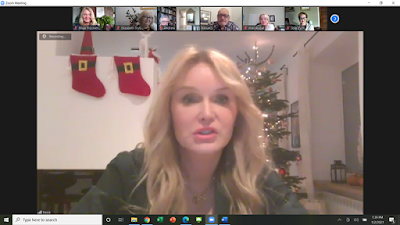 During the event, Mr. Seweryn discussed his career highlights and challenges, artistic interests, and insights about the professional training and skills of actors.  He commented,”I am honored to be able to talk to you, and that I have the honor of receiving this extremely important award today. I know something about the fate of an actor, an actress who works not in his or her own language, not in his or her country. Naturally, it is difficult to compare my life to that of Modrzejewska, I would never dare to do something like that, but I know what it means to work in a different environment. I do not know how many times Ms Helena Modrzejewska had to repeat the text before entering the stage, but I assure you that it could have been many times; for me – a few thousand.”  Remarkably, Andrzej Seweryn achieved a feat practically impossible for a foreign-born actor in France: he was admitted to the Comédie-Française) and received  Légion d'honneur for his contribution to French culture in 2005.  His hard work led to an astounding success! 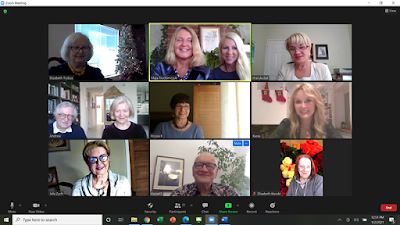 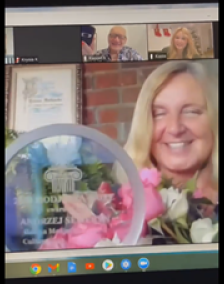 The Modjeska Prize presentation included also a diploma and a huge bouquet of roses, with flags of Poland and the U.S. given on camera to the eminent actor by Dr. Maja Trochimczyk, Club President, and Anna Sadowska, a Board member.  Maja Trochimczyk stated: “It is a great honor for us, here in California, to have such an incredible friend in Poland, and to have been visited so many times here in Los Angeles to witness his talent in person.  We also know and admire his films and TV roles. Few of our members have ever had a chance of attending his performances in Poland. We are in awe of the breath of Mr. Seweryn’s knowledge: not only the expertise in acting techniques, but also the whole scope of world literature, from Shakespeare, to Moliere, to Mickiewicz, and Witkacy… Mr. Seweryn’s has achieved so much in one lifetime, we’d have to split into several lives to match it.” 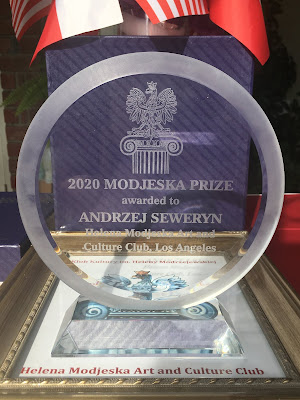 ABOUT THE MODJESKA PRIZES:
In 2010, in order to commemorate its patron, Helena Modrzejewska (Modjeska) and honor the achievements of outstanding artists of Polish stage, the Club established an annual award for lasting contributions to Polish culture in the field of acting: "The Modjeska Prize.” The Modjeska Prize is designed as a “life-time achievement” award and includes a crystal statuette and a diploma. In October 2010, the distinguished Polish actor Jan Nowicki received the first prize. In 2011, the prize was awarded ex aequo to actors Anna Dymna and Marian Dziędziel. In 2012, Barbara Krafftówna was the laureate. In 2018, the Club honored with the Helena Mojeska Prize its long-time Honorary Member, eminent actress Jadwiga Barańska. In 2019, the award was given to two actresses from the Polish Theater in Toronto - Agata Pilitowska and Maria Nowotarska. In 2020, Andrzej Seweryn was the recipient of this important award. 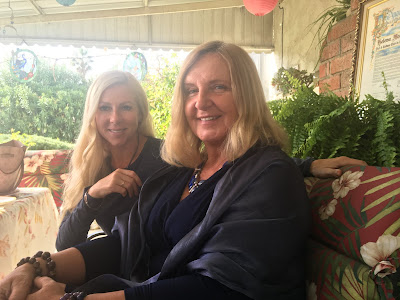 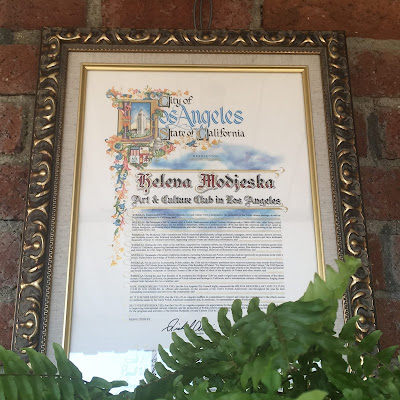 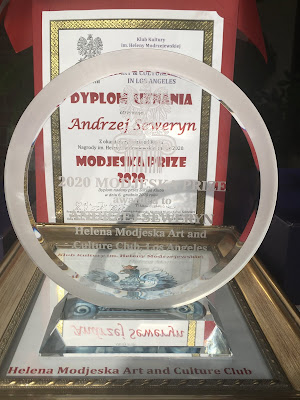 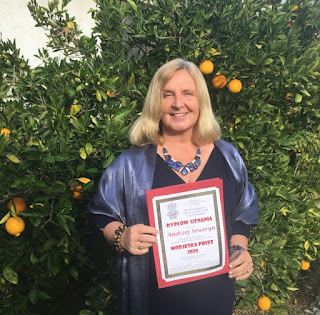 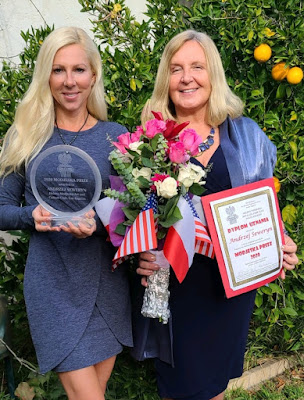 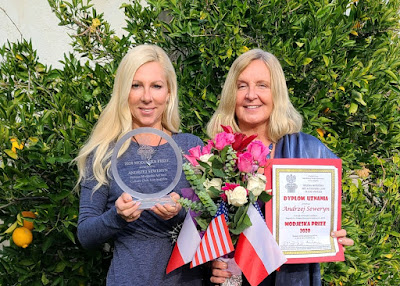 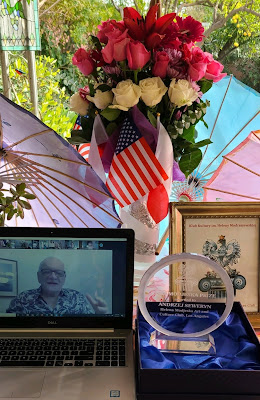 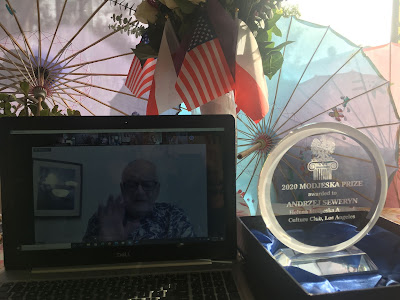 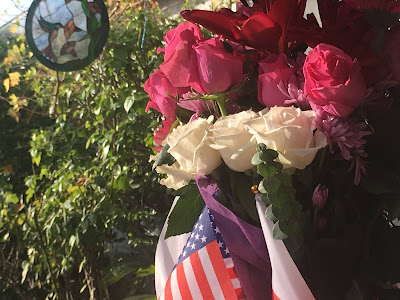 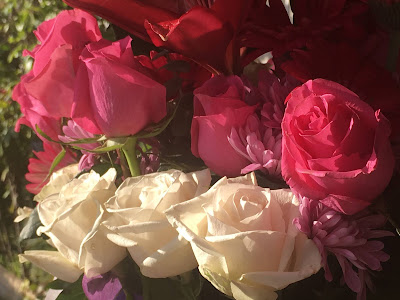 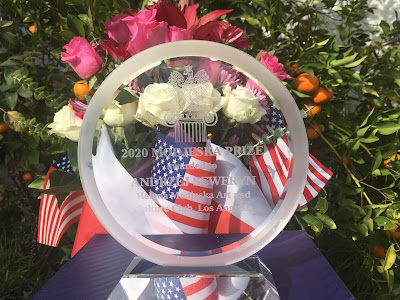 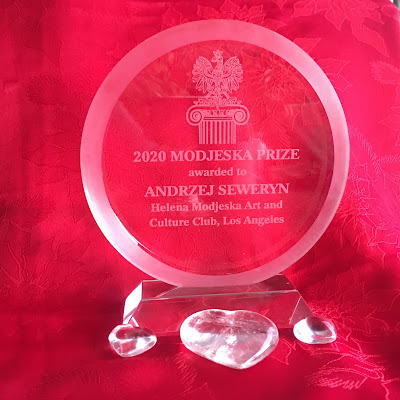 Posted by Maja Trochimczyk at 4:02 PM