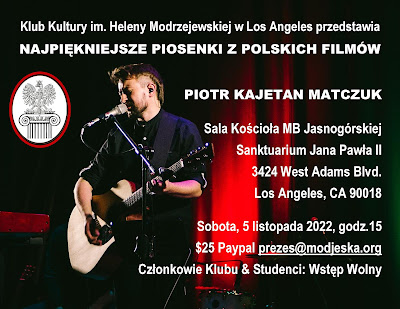 Helena Modjeska Art and Culture Club has the pleasure of inviting all Club members and guests to a special concert by the founder of the group Piramidy, singer, guitarist, composer, and song-writer Piotr Kajetan Matczuk of Warsaw, Poland. The concert, entitled The Most Beautiful Polish Film Songs will take place on Saturday, 5 November 2022 at 3 pm at the Parish Hall of the Our Lady of the Bright Mount and John Paul II Sanctuary in Los Angeles, 3424 West Adams Boulevard, Los Angeles, CA 90018.
Free for students under 18 years old and for Club members. Others $25 per person. Checks to Helena Modjeska Art & Culture Club. PayPal to prezes@modjeska.org. All revenue will be donated to the Polish Church and the Polish School, 50/50. RSVP to prezes@modjeska.org. 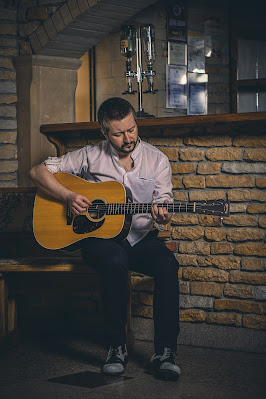 THE MOST BEAUTIFUL POLISH FILM SONGS

We invite you to a unique concert, which will consist of songs well known to fans of sung poetry and Polish movies. The program will also include original songs written by a musician appreciated in Poland, Piotr Kajetan Matczuk. There will be songs from Polish movies along with classics of Polish songs with poetic texts by the greatest poets. Optimistic and pleasant mood guaranteed. Certainly, this concert will appeal to everyone who appreciates good lyrics, accompanied by a guitar.

In this concert you will return to the most famous and popular ballads, melodies and film songs, such as: Prawo i pięść, Czarne chmury, Jan Serce, Noce i dnie (directed by Jerzy Antczak, honorary member of the Modjeska Club), Stawka większa niż życie, Kariera Nikodema Dyzmy, and songs from the Sienkiewicz trilogy, directed by Jerzy Hoffman.

There will be happy songs that will be sung together with the audience. There will also be surprises and anecdotes that will take the listeners into the world of Polish film. All this will create a unique atmosphere of emotions and humor - it will be an afternoon full of emotions, good humor and good music, perfectly performed.

Pianist, guitarist, arranger, songwriter. Leader and founder of the PIRAMIDY band. Author of theater and film music. Artistic director of the International Song Festival Szlakiem Bardów. He has performed not only in Poland, but also in many countries, incl. in the USA, Ukraine, Russia, Lithuania, France, the Netherlands, Luxembourg, Germany, Switzerland, the Czech Republic, in many prestigious concert halls around the world, such as the Columbiahalle in Berlin or the Pyotr Tchaikovsky at the Moscow Philharmonic. He has a dozen or so albums to his credit, recorded not only with the Piramidy ensemble, but also with Polish actors. He composed the album Dopokąd for Krzysztof Tyniec and was
the musical director of his ensemble at the Ateneum Theater in Warsaw.

The album The Year of War with its original texts was premiered at the NATO Allied Joint Force Command military base in Brunssum for Polish soldiers commanding the mission in Afghanistan. He performed at the official celebration of the 25th anniversary of the demolition of the Berlin Wall in Fontanehaus in Berlin with his original song "Charlie Checkpoint" and at the Permanent Representation of the Republic of Poland to the United Nations in Geneva. He has composed music for over a dozen documentaries and several theater performances. He is also a respected producer and producer of audiobooks.

Matczuk last appeared in a Modjeska Club's concert in 2019, with Tomasz Imieniowski, bass guitarist, when Piramidy presented a recital of songs based on poems by Adam Mickiewicz in Playa del Rey. Many of these humorous and sentimental songs were composed by Matczuk himself. 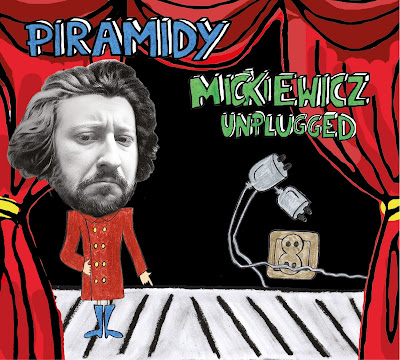 Posted by Maja Trochimczyk at 8:00 AM No comments: