On Friday, August 13, 2010, Modjeska Club members had a rare treat of witnessing a premiere of a brand new documentary, The Labyrinth, dedicated to a monumental artwork by a Polish artist. The premiere was a part of the International Documentary Association’s DocuWeeks 2010 Theatrical Showcase, which is an Oscar qualifying event. The well-attended screening at the Arc-Light Cinemas Hollywood was followed by a VIP Reception co-hosted by our Club, the Consulate General of the Republic of Poland in Los Angeles and ARRI Camera Inc. 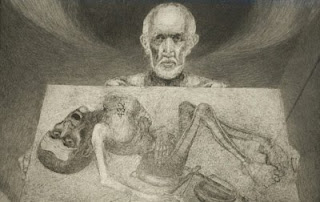 The Labyrinth is an immersion into the artwork and testimony of Auschwitz survivor, Marian Kołodziej, a Polish-Catholic, who was sent to the camp on the first day it opened. After his liberation, Mr. Kołodziej went on to become a noted set and costume designer in theater and film. He did not speak about the war-time horrors until fifty years later. In the final decades of his life, Mr. Kołodziej decided to document his memories and experiences in a unique artwork – an extensive collection of large graphic pen and ink drawings, containing scenes of death and suffering, prisoner portraits, visions, dreams and nightmares.

The collection was gathered in a dedicated gallery, housed at the St. Maximilian Kolbe Franciscan Center, near Auschwitz, Poland. Mr. Kołodziej’s testimony about his experiences in the death camp attracted the attention of American film-makers who produced a moving and touching film about resilience and hope in the midst of unbelievable suffering.

Filmed on location in Poland, the film features our friend, former Polish consul, Roman Czarny, as the voice of Marian Kołodziej. The original music score was composed by Marek Żebrowski, director of Polish Music Center at USC. From a lone voice of the cello, to flowing textures and dramatic piano chords, the music is a restrained, profound, and sophisticated interpretation of the haunting art. The director/producer, Jason A. Schmidt, and producer, Ron Schmidt, S.J., are planning an expanded version of this well-received film and are grateful for support from the Polish American community. Donations may be made out to Hope Media Productions and sent to: Ron Schmidt, S.J., Hope Media Productions, 6656 Sunset Blvd. , Hollywood, CA 90028. For more information see: www.thelabyrinthdocumentary.com. 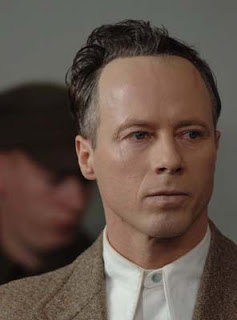 The tragedy of Auschwitz and the suffering of Poles associated with the camp was a subject of another recent film, Death of Captain Pilecki, starring Marek Probosz and directed by Ryszard Bugajski. This astounding true story of a WWII hero, a captain in Polish underground Home Army, who decided to get arrested and shipped off to Auschwitz so he could report about the camp to the Allies and create a resistance network within. Arrested in 1940, Pilecki escaped in 1943 and the intelligence he gathered was sent off to England, only to be disregarded as exaggerated. He fought in the Warsaw Uprising and richly deserved the highest state medals awarded to him posthumously in 1995 by the government of democratic Poland. He died in 1948, after being arrested for gathering information about another atrocity, the Soviet gulags.

Probosz’s interpretation was praised by critics as being “intensely compelling” (“Death of Captain Pilecki” review of 2006). On Saturday, September 21, 2010 the National Public Radio broadcast an interview about the film with Marek Probosz as part of its most popular programs, “All Things Considered.” For those who missed it, the program is available online at the NPR Website.

The heroism and suffering of Poles during WWII were not well known outside the country's borders. It is high time for stories like that of Marian Kolodziej or Captain Witold Pilecki to be told and heard.

We are pleased to announce that the Modjeska Club will host a meeting with Prof. Leszek Balcerowicz, a noted economist and politician, who led the transformation of Poland's economy into a modern, free-market system in the 1990s. Prof. Balcerowicz's earlier visit, planned for April 2010, was canceled due to the national mourning period after the crash of the Presidential plane near Smolensk, Russia.

Posted by Maja Trochimczyk at 10:54 PM No comments: