Who Was Pola Negri? A Play by Kazimierz Braun 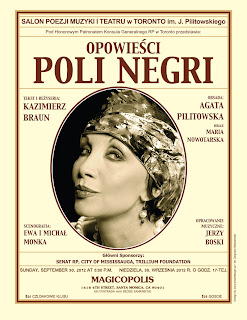 POLA NEGRI was the greatest Polish star in the history of cinema. She was born as Apolonia Chałupiec, in the small town of Lipno, near Toruń in 1897. From 1923 to 1934, she performed in twenty four Hollywood films, including The Spanish Dancer, Forbidden Paradise, A Woman of the World, Hotel Imperial, Loves of an Actress, and A Woman Commands. Each of them received enthusiastic reviews. At the same time, Negri also gained notoriety as the heroine of a scandalous romance with Charlie Chaplin, followed by an engagement to Rudolf Valentino. Just before their wedding, Valentino died in unexplained circumstances. Shortly afterwards, Negri married a Georgian prince, Sergey Mdivani. This was her second marriage. To make matters worse, public opinion judged Negri's marriage to Mdivani as a betrayal of Valentino, whom she had mourned publicly and for whom she had arranged a spectacular funeral. Attendance at her films fell, which translated into a withdrawal of contracts from film studios. Negri returned to Europe to work in Germany. As the Nazis tightened control over the film industry, screenplays in which she wanted to perform were censored. Asked to appear in an overtly anti-Polish film, she fled Germany. Negri lived for a while on the French Riviera, until the Second World War caught up with her. In 1940, she left once more for America. Apart from three insignificant roles, however, no film offers awaited her in Hollywood. She spent her last years in San Antonio, Texas, where she died in 1987.

Prof. Braun is a director, writer and a scholar. He studied Polish language and literature at the Adam Mickiewicz University in Poznań, Poland, where he obtained his doctorate, and later obtained his postdoctoral “habilitation” degree at the University of Wrocław in Poland. He studied theatre direction at the University Theatre School in Warsaw, Poland. He holds the title of professor in Poland as well in the United States where he presently teaches at the New York State University in Buffalo. Professor Braun was a director of the J. Osterwa Thetre in Lublin and the Contemporary Theatre in Wrocław, Poland. There, he directed a sensational production of The Plague based on the novel by A. Camus, in which he alluded to martial law imposed on Poland at that time. For this, he lost his job and was forced to emigrate. Presently he directs plays and lectures in the Unites States and other countries, including Poland. He is the author of over thirty books, papers, as well as novels which were published in Polish, English and Czech languages. He also wrote several plays, staged in Poland, The United States, Canada, Ireland, and Russia. For Maria Nowotarska and Agata Pilitowska he has written a series of plays, featuring great women who emigrated from Poland: Helena - Play About Helena Modjeska, American Dreams, Tamara L., Radiation, Tales of Pola Negri, and Ordonka’ Secrets. These plays were performed in many countries - in Polish, with simultaneously projected translations in other languages. Professor Braun received many prestigious artistic and literary prizes and awards: Guggenheim, Fulbright, Turzański Foundation, and from a Foundation in Japan. He also received the Polish Cross of Merit and the Polish “Gloria Artis” medal.

Maria Nowotarska graduated from the Cracow University Theatre School and for thirty three years was a staff actress at the J. Słowacki Theatre in Cracow, Poland. During her career there, she played many significant roles under the direction of several outstanding directors, both in comedy and drama. She played in a number of Polish films: Nad Niemnem (On the River Niemen), Między Ustami a Brzegiem Pucharu (Between lips and the rim of the cup), Kolory Kochania (Colours of love) and in many TV productions. She came to Canada in 1990 and singlehandedly created Polish theatrical life in Toronto. She is the artistic director, stage director, as well as actress of the “Salon of Poetry, Music and Theatre” Polish Theatre. The Salon's productions included an array of the best Polish poets, from Kochanowski to Szymborska and Twardowski. Ms. Nowotarska created the Actors' Studio which is associated with the Salon and which introduces young people of Polish origin to work on stage. Ms. Nowotarska’s Salon was honoured with the Medal of Polish Senate, and the “Cracow 2000” medal . She herself was awarded the Prize of The Adam Mickiewicz Foundation in Canada, and from the Turzański Foundation. She was also accorded the title “Woman of the Year” (1995) and received the Golden Medal of the Canadian Polish Congress. She was awarded the “Cross of Merit” by the President of the Polish Republic, the title “Distinguished Advocate of Polish Culture”, and the “Gloria Artis” medal by the Polish Minister of Culture. She was awarded a Gold Medal by the American Polish Institute in Miami, Florida and the “Golden Owls” statuette in Vienna, Austria.

Agata Pilitowska graduated from the Cracow University Theatre School in Cracow, Poland and came to Canada in 1986. Agata Pilitowska lives in Toronto. She played many English speaking roles in local theatres. From 1992 she is associated with the Salon of Poetry, Music, and Theatre where she played in more than 100 productions, most notably in the series of dramas, written and directed especially for her and for Maria Nowotarska by Kazimierz Braun. These plays were performed not only in Toronto, but also in many cities throughout Canada, the United States, Europe, as well as in Sao Paulo, Brazil. Her evening of poetry, Szymborska Nobel 96, was performed in Polish and English, among other places at the Concordia University in Montreal, Washington University in Washington D.C., and as part of the International Writers’ Festival in Ottawa. Since 1999 she has been a presenter and journalist for OMNI TV, where she hosts a weekly programme Z Ukosa (Sideglance). For OMNI TV she dubbed thirty three hours of TV programme “Canada, the Peoples' History” and twenty programmes Ecce Homo. She was also narrator and host of Polish language version of the series Science Show. Agata Pilitowska was awarded the title “Distinguished Advocate of Polish Culture” (2004), the medal “Gloria Artis” (2006), and the “Golden Owls” statuette (2011) for her achievements in acting and theatre in Vienna, Austria.

Posted by Maja Trochimczyk at 4:36 PM No comments:

Carmageddon? No! "Pola Negri" - Polish Theatre from Toronto at Magicopolis, 9/30/12

On behalf of the Board of Directors of the Helena Modjeska Art and Culture Club in Los Angeles, I'm delighted to invite Club Members and Guests to a fascinating spectacle about a silent film star, Pola Negri.  The play, written by the eminent playwright and director, Kazimierz Braun, follows Pola Negri's career and presents its highlights, with film excerpts.  This rare treat will be in Polish; with Agata Pilitowska as Pola Negri and Maria Nowotarska.  The silent-film era costumes will delight the audience, as will the sultry and passionate portrayal of the famous actress.

CALENDAR OF EVENTS IN THE FALL 2012


In the fall 2012 season the following events are planned:

Hope to see you all during our enjoyable new season!


During the meeting new bylaws were approved and Barbara Krafftowna was voted as the next recipient of the Modjeska Prize.

Pictures from the General Electoral Meeting are at: Modjeska Club Elections 2012 Picasa Web Album. Links to other albums are on the right margin.

Posted by Maja Trochimczyk at 11:39 PM No comments: