From the Winter Wonderland to Tibet... 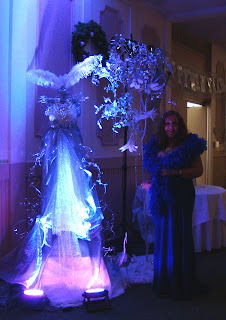 The wonderful New Year's Eve Ball at the private Long Beach Petroleum Club was a enjoyable and elegant way of welcoming the new year 2011.

It is the year of the Rabbit in the Chinese calendar and we hope that it will be both peaceful and blessed - bringing in a welcome moment of tranquility after the turmoil in the year of the Tiger and before the final Apocalypsis of 2012, if you believe in Mayan prophecies of the end of time.

Whether you believe the Mayas or not, believe your Maja and definitely plan to spend the New Year's Eve with us next year. Our Ball welcoming the 2011 was quite an astounding affair!

Krystyna Okuniewski outdid herself as she designed and made extraordinary decorations, transforming the Terrace Room of the Petroleum Club 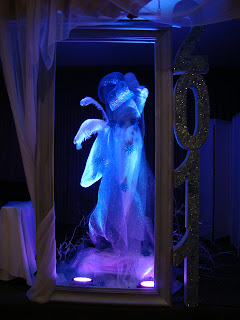 into a magical Winter Wonderland with frost flowers on silver trees, snowflakes everywhere, and ostrich and peacock feathers adorning the centerpieces.

The white and light blue room looked enchanted, with silver snowflakes and icy blue crystals everywhere. Those who attended and those who did not may enjoy our album of photos at New Year's Eve - Picasa Web Albums.

DJ Richard Mojica provided the stars on the ceiling and a well-rounded music program, with golden oldies of Sinatra, Piaf, and Elvis, mixed with ballroom standards (Strauss waltzes, classic sambas), Polish hits selected by Wojtek Szeremeta, and a full range of fashionable Latin and Italian music that everyone loves dancing to.

Andrzej Maleski surprised everyone with a personal and very Polish accent: "Koncert Zyczen" (Concert of Best Wishes) with witty dedications of Polish oldies to individual members of the Club. Irene Ujda led the whole Club and guests in a Polish classic dance, the polonaise, set to the music from Andrzej Wajda's film "Pan Tadeusz". 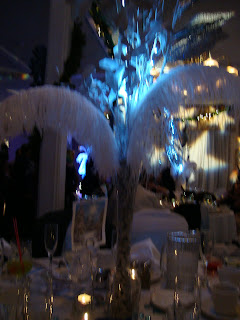 The Petroleum Club chef and kitchen crew are highly recommended for the quality of their buffet selections and their efficient and timely service. We got a lot of positive comments about the quality of our dinner, which is rare on such occasions. Our menu was not your typical hotel fare, for sure...

All in all, the Modjeska Club welcomed the New Year with sophistication and class, following on the best traditions of Polish intelligentsia and nobility.

We are already planning our events for the spring and are looking forward to our next meeting at the artistic and modern residence of tapestry-artist Monique Chmielewski Lehman and NASA's own David Lehman in Pasadena.

CALENDAR OF EVENTS PLANNED FOR THE SPRING OF 2011:

* January 22, 2011, 6:30 p.m. - Travel to Tibet with Edward and Maria Pilatowicz, screening of film and conversations with long-time club members and past-presidents. Home of Monique and David Lehman, Pasadena.

* February 19, 2011, 6:30 p.m. - Mickiewicz Today, conversation with Prof. Roman Koropeckyj, UCLA, Mickiewicz Scholar and Prof. Leonard Kress, Owens College, poet and translator of Pan Tadeusz into English. Illustrated with a surprise program by a famous Polish actor in Polish. The conversation will be in English. The Ruskin Art Club, Los Angeles.

* April 16, 2011, 6:30 p.m. - Milosz in My Life, conversation with poets John Guzlowski and Cecilia Woloch, about Czeslaw Milosz, Nobel-Prize winning poet, whose year is celebrated in 2011. The Ruskin Art Club, Los Angeles.
Posted by Maja Trochimczyk at 6:32 PM No comments: 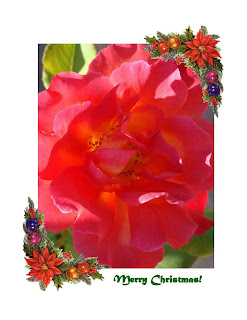 After a lovely, warm and welcoming Christmas Party at the Wilks in Anaheim Hills, singing Polish Christmas Carols with wonderful musicians, Karolina Naziemiec (viola and voice), accompanied by Arek Niezgoda (guitar) and Irina Chirkova (cello), we said our farewells to the Old Year and welcomed the New Year during an elegant New Year's Eve Ball at the private Long Beach Petroleum Club.
Our Ball had the theme of "Winter Wonderland." Board member and artist Krystyna Okuniewska designed the decorations in whites, silvers and blues. She transformed the hall into a magical space of sparkling crystals and ice. Dance music was by DJ Richard Mojica, who presented an assortment of favorite dance music, from golden oldies, ballroom, through rock, salsa, tango, waltz. The eclectic evening had something for everyone and featured Polish dance music and a Polonaise selected by club member Wojciech Szeremeta. Andrzej Maleski entertained the guests with a concert of Polish oldies dedicated to various attendees. Historical dance choreographer Irene Ujda led the Polonaise to officially start the ball. A report with photographs of the event will be available on the new website. For now, the invitation contains the basic information about it: Invitation Flyer PDF 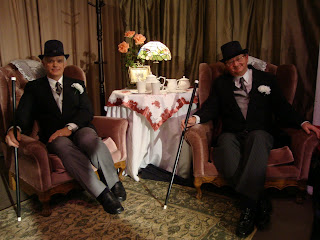 We are slowly adding material to the website. Recently, a report from the Kabaret Starszych Panow Program (November 21, 2010), was added to the Polish part of the new site, with content by Jolanta Siemieniewski, Witold Fraczek and Witold Czajkowski: Kabaret Report in Polish, PDF. These texts will also be translated and added to the English website.
CALENDAR OF EVENTS PLANNED FOR THE SPRING OF 2011:
Posted by Maja Trochimczyk at 12:43 AM No comments: