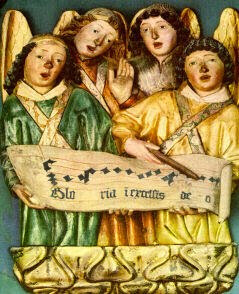 Our member-only exclusive Christmas Caroling Party will take place this year on December 7, 2019, at 6:30 pm at the elegant residence of Helena and Stanley Kolodziey in Beverly Hills, CA. The program includes a conversation with Marcin Gortat about his career, interests and plans, a mini-concert by talented jazz vocalist Karolina Naziemiec, and Christmas Carols sing-along led by Karolina. Of course, a Christmas catered dinner with amazing traditional treats, and lots of heartwarming music and fun.
YouTube Video from the event: https://youtu.be/HKSBs5BQVkw 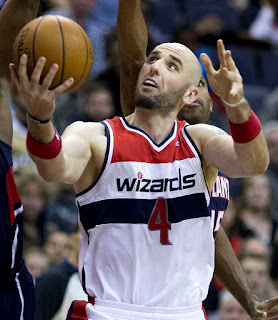 Marcin Gortat is a Polish professional basketball player who last played for the Los Angeles Clippers of the National Basketball Association (NBA). The 6 ft 11 in, 240-pound center is the son of boxer Janusz Gortat. As a child, Gortat participated in football and track and field, where he competed in the high jump. His father, Janusz Gortat, was a Polish boxer and a bronze medalist in the light heavyweight class during the Munich 1972 and Montreal 1976 Olympics, and his mother, Alicja Gortat, was a representative of the Polish national team in volleyball. He has an older brother, Robert, who is also a boxer. Gortat grew up in Łódź, Poland. He graduated from Technical School in Łódź. Apart from Polish, he is fluent in English, German, and Serbian. 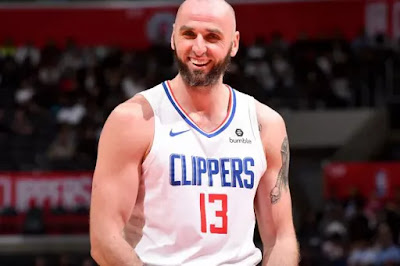 Gortat started his career with ŁKS Łódź, then played three seasons for RheinEnergie Cologne in Germany's Basketball Bundesliga, with whom he won the domestic championship in 2006 and played in the 2006–07 Euroleague season for the first time in the team's history. After being drafted 57th overall in the 2005 NBA draft by the Phoenix Suns (with his rights later traded to the Orlando Magic), Gortat elected to keep playing with Cologne in Germany until 2007. In the U.S. he played for the Orlando Magic  (2007-2010), Phoenix Suns (2010-2013), Washington Wizards (2013-18), and Los Angeles Clippers (2018-19). After retiring from professional sports, he is engaged in a variety of charitable and cultural projects. 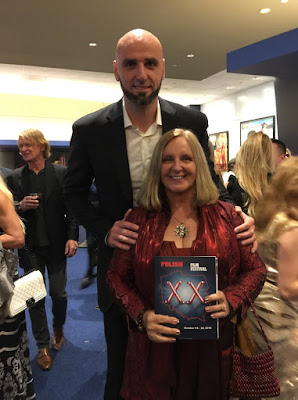 Marcin Gortat with Prezes at the Polish Film Festival Gala

He is a member of the Modjeska Club since November 2018, and participated in many club events. His Polish Night Ball on February 15, 2020 held in Beverly Hills promises to be the event of the season! In January 2019, he organized the Polish Heritage Day with LA. Clippers. 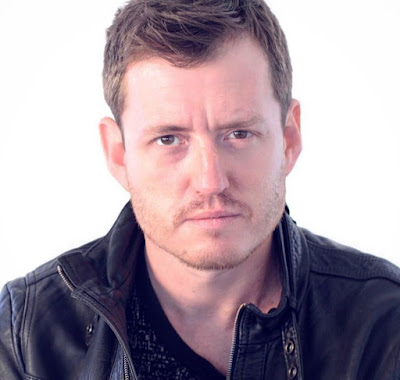 The interview will be conducted by Marcin Harasimowicz, actor and journalist. Marcin (Martin Harris)  is an American actor, writer and producer born in Poland, living in Los Angeles and Tuscany (Italy). Known for his role of Lt Nikolai Zybulski in TNT's "The Last Ship", also TV shows like "StartUp", "Days Of Our Lives", "Scorpion", "Making History" and others. Author of two books. Huge fan of Tottenham football club and of sports in general. 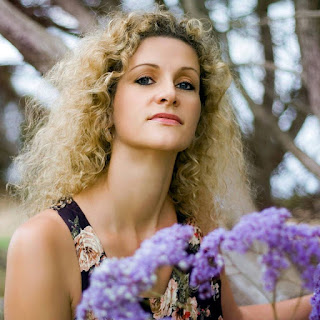 Karolina Naziemiec is a Polish violist and jazz vocalist known as KaroliNa, who has been performing and teaching in the United States since 2001. She is a recipient of an artistic visa on the recommendation of the American Federation of Musicians, who cited her as being “a violist of extraordinary ability.”  Ms. Naziemiec came to the United States for the first time in 2000 at the invitation of The Idyllwild Arts Summer Festival Orchestra in California, for which she twice served as principal violist. Ms. Naziemiec—the daughter of engineers and amateur musicians—grew up surrounded by music to become the first professional musician in her family. Born in Jedrzejow, Poland, she attended the Szymanowski Music High school in Katowice, then continued her education at the Chopin Academy of Music in Warsaw, and received her Master’s Degree in Music Arts/Viola Performance from the Academy in 2000. 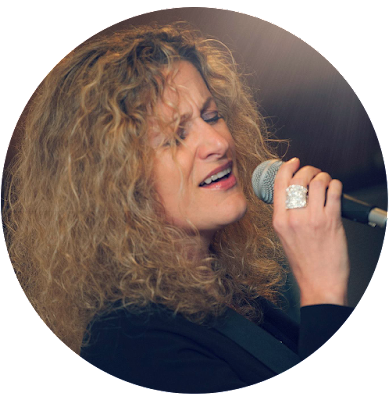 After a successful career in Poland, she was granted a full scholarship at the University of Southern California, where she attended the Advanced Studies Program in 2001- 2002 and completed the Master of Music in Performance program in 2004. In the US, she has performed with the most prestigious orchestras including The Los Angeles Opera; The Los Angeles Master Chorale; The Long Beach Symphony Orchestra; The Jewish Symphony Orchestra in Los Angeles, California; The American Youth Symphony at Carnegie Hall in New York City and in Los Angeles; and The Aspen Music Festival Orchestra in Aspen, Colorado.  Ms. Naziemiec currently serves as a music coach for the Junior Chamber Music and provides private instruction in viola, violin, and piano to a wide range of students, from very young children to aspiring professionals. Karolina Naziemiec also performs in Los Angeles as a jazz vocalist. She recorded her first CD Introduction in 2008, and in 2015, she released Songs of Hope, which was considered for Grammy nomination in 2016. She is interested in and comfortable with all types of music, from classical to jazz, folk, and hip-hop. 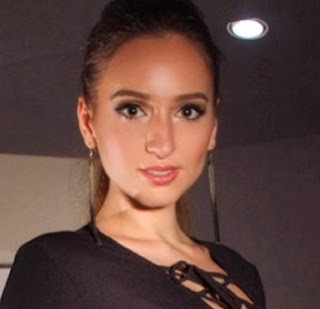 KaroliNA will be accompanied by Olivia Kierdal - a singer, songwriter, pianist, organist and producer. She was born and raised in Sydney, Australia and recently moved to Los Angeles. She has been performing since she was 4 years old, and writing songs since age 9. Since then she has written well over 100 pieces of music, graduated in Contemporary Music and Media from Macquarie University and California State University, and has worked as a writer in the USA, Japan and Australia. 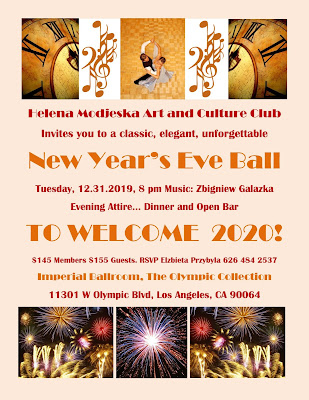 
The Modjeska Club will welcome the New Year on December 31, 2019 with a New Year's Eve Ball, at the Imperial Ballroom, The Olympic Collection, 11301W. Olympic Blvd, Los Angeles, CA 90064 (just west of 405)! Evening attire, hors d'oeuvres, dinner, desserts, open bar, raffle with exclusive prizes, and dance music by Zbigniew Galazka.   The reservations should be sent to Elzbieta Przybyla, Treasurer, at 626 484 2537. Tickets $145 members, $155 guests per person.  You can also mail your check to Modjeska Club  co Elizabeth Przybyla, 15308 Ashley Ct, Whittier CA 90603. We have 11 tables reserved and there is only room for 4 more! 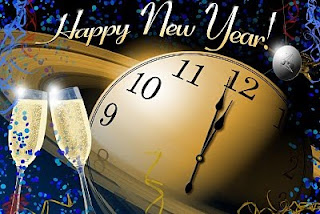 Farewell to Witold Sokolowski
Obituary in Los Angeles Times, December 12, 2019
November 21, 2019
No words are adequate to express the sadness I feel about the death of Witold Sokołowski – scientist, author of numerous scientific publications, member of the California Institute of Technology, but above all – a wonderful man – Vice President of the Helena Modrzejewska Art and Culture Club – Advocate of Polish cultural heritage, science and art in California. It is an unimaginable loss.
Adam Glapiński
President of Narodowy Bank Polski
https://www.legacy.com/obituaries/latimes/obituary.aspx?n=witold-sokolowski&pid=194698524 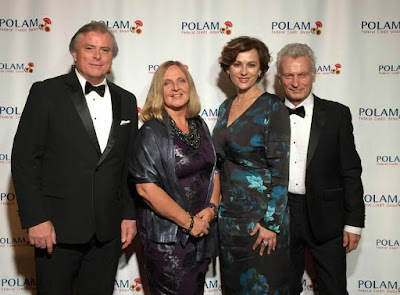 Board members at Polam's Anniversary Ball in October 2019 - Chris Justin,
Maja Trochimczyk, Aleksasndra Kaniak, Witold Sokolowski
We are deeply saddened by the tragic death of Dr. Sokolowski in a car accident on November 21, 2019. He was a wonderful colleague and everyone in the club appreciated his good humor, dedication, and creativity.  He is sorely missed.
Dr. Witold Sokolowski worked for the Jet Propulsion Laboratory (JPL)/California Institute of Technology (Caltech) for more than 30 years   as  the Senior  Materials Scientist on new cutting-edge materials for space science and interplanetary mission applications. He is the author of more than 90 publications, including papers published in leading international technical journals, two US patents, two scientific books (the third book was in final stages) and over 20 NASA Novel Technology Reports (NTR). In the last 15 years, he was involved in lightweight advanced deployable structure/aperture technologies. He was the founder and principle investigator of novel, second generation Cold Hibernated Elastic Memory (CHEM) self-deployable structure technology at NASA/JPL. He authored or co-authored about 90 publications including papers in leading international reference technical journals, 2 US Patents and 16 NASA Novel Technology Reports (NTR). He worked in collaboration with 37 different co-authors.Dr. Sokolowski recently edited a volume of scientific studies:  Cold Hibernated Elastic Memory Structure: Self-Deployable Technology and Its Applications CRC Press, December 2018. He held two patents, with multiple citations by others: patent US6702976B2 “Cold hibernated elastic memory self-deployable and rigidizable structure and method” (sole author) and as coauthor US5476633A “Ultrahigh-purity dimensionally stable INVAR 36.”  He was the author or co-author of many peer reviewed articles, such as: “Medical applications of shape memory polymers” Biomedical Materials vol. 2: 1 (2007, cited by 291 scientists), “Cold hibernated elastic memory foams for endovascular interventions” Biomaterials 24 (2003): 491–497; “Advanced Self-Deployable Structures for Space Applications” Journal of Spacecraft and Rockets 44:4 (2007); and “Shape Memory Polymer Foams for Biomedical Devices,” The Open Medical Devices Journal, 2: 20-23 (2010).He co-authored many chapters in scientific books:  “CHEM Biomedical Applications” (2019), “Improvements for Large CHEM Structures” (2018); “Effect of Cold Storage” (2018); “CHEM Technology Development” (2018), “Properties of Baseline CHEM Foam Material” (2018); “Future CHEM Thin-Film Spacecraft” (2018); “Thermomechanical Behavior of CHEM Foams,” “CHEM for Endovascular Interventions,” “Thiol-ene/acrylate systems for biomedical shape-memory polymers,” (2015); “Shape-Memory Polymer Foam and Applications” (2010). His scientific also articles include: “Shape Memory Polymer Foams for Biomedical Devices” (2010); “Shape memory self-deployable structures for solar sails” (2008); “Advanced Self-Deployable Structures for Space Applications” (2007); “Medical applications of shape memory polymers” (2007); “Surface control of cold hibernated elastic memory self-deployable structure” (2006); “Potential biomedical and commercial applications of cold hibernated elastic memory (CHEM) self-deployable foam structures” (2004); “Applications of cold hibernated elastic memory (CHEM) structures” (2003); “Cold hibernated elastic memory foams for endovascular interventions” (2003); “Die Attachment for −120°C to +20°C Thermal Cycling of Microelectronics for Future Mars Rovers—An Overview” (2001); “Influence of long-term storage in cold hibernation on strain recovery and recovery stress of polyurethane shape memory polymer foam” (2001); “Cold hibernated elastic memory (CHEM) self-deployable structures” (1999); “Temporally And Thermally Stable Iron/Nickel Alloy” (1995); “Long-term and thermal instability of carbon/carbon composite”  (1994), and many more.Dr. Sokolowski was a recipient of many awards from NASA and other technical organizations, including the Innovation and Improvement NASA Nova Award in recognition of his continued development and conception of new ideas and improvements of advanced space structures. He was a member of editorial boards for several technical journals and served as an advisor/thesis reader to Ph.D. students at Harvard University and other universities. He was selected or elected to numerous special technical assignments, professional organization/conference committees and journal peer reviews. He was invited to participate in several television programs prepared  by TV Polonia.After leaving JPL, he worked at Sokolowski Consulting Services on commercial and medical applications of some advanced material technologies as well as a consultant for US and international firms. He enjoyed traveling, sport (skiing, tennis, swimming) and good classical & modern music. He was elected as a journal referee in several technical/scientific magazines and selected to numerous special technical assignments, professional organization/conference committees and journal peer reviews. Dr. Sokolowski served as an advisor and thesis reader to PhD and Master students in smart materials/structures area at Harvard University and other universities.
Photos from Past Events
Nov. 11, Independence Day Concert 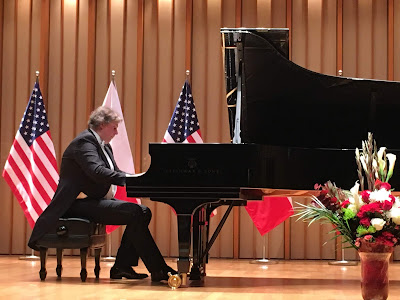 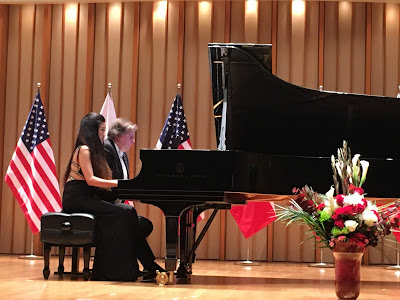 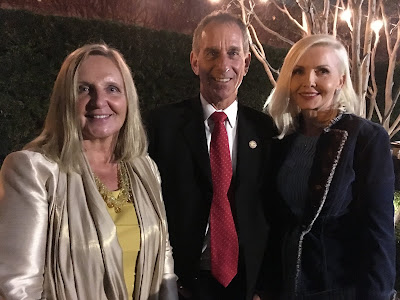 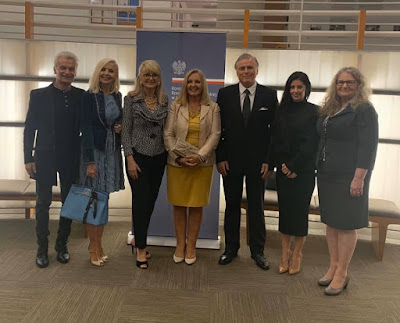 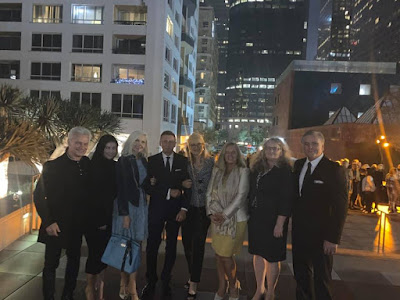 Board of Directors with Consul General Jaroslaw Lasinski 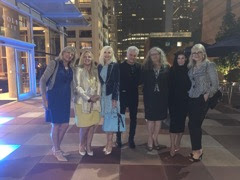 Witek Sokolowski with Board and friends 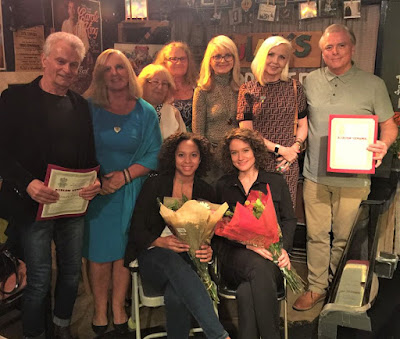 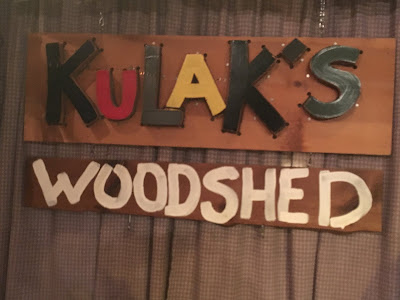 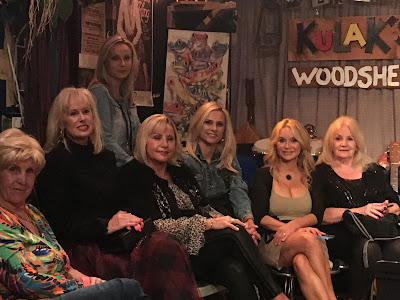 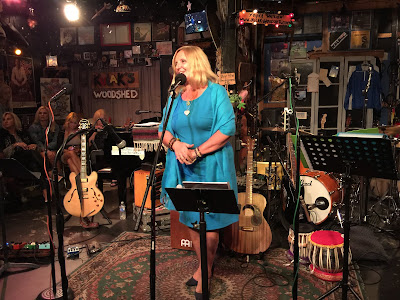 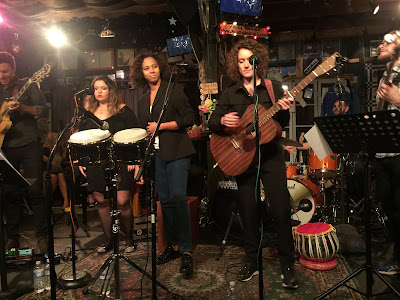 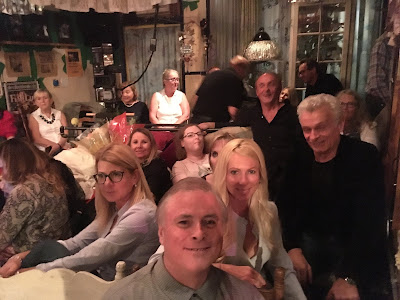 Specialty seating for 10 - on a sofa-bed! With Chris, Ania and Witek 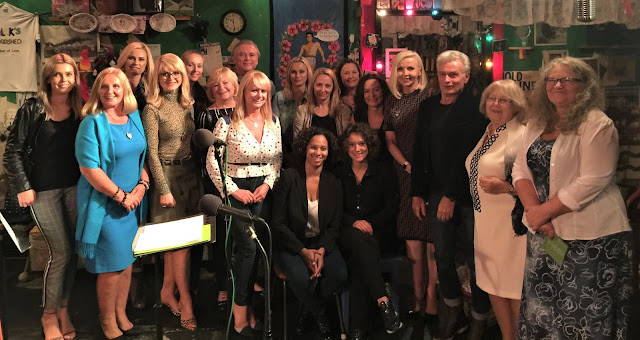 The music stars with the board and guests, a fantastic concert in very tight space....

Posted by Maja Trochimczyk at 3:13 PM No comments: