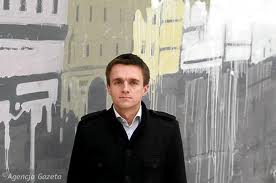 Leszek Jażdżewski, a noted Polish journalist and editor in chief of Liberté!, will visit the Modjeska Club to discuss – in English – about “The Change of Generations in Poland – Challenges and Opportunities.”  The event will be directed at our young-at-heart membership with political interests, especially those who will bring English-speaking guests.  Our meeting will take place in the afternoon of Saturday, October  27, 2012 at 4:30 p.m. at Hellada Gallery (117 Linden Avenue  Long Beach, CA 90802, tel. 562. 435. 5232).  We will start early, to leave time for Halloween parties in the evening, including one at Hellada.  The interview with our distinguished guest will be conducted by Marcin Frybes, a distinguished historian and journalist.

Leszek Jażdżewski is the founder and editor-in-chief of LIBERTÉ!, Polish liberal journal (English version of LIBERTÉ! portal is at www.liberteworld.com). He is a publicist, NGO activist (Non-Governmental Organizations), and coauthor of books Liberal reflections on life chances and social mobility in Europe, and  Democracy in Europe Of the People, by the People, for the People? He is also the coauthor of Central European Dictionary of Political Concepts.

Jażdżewski publishes in various Polish newspapers and journals (Wprost, Newsweek, and Gazeta Wyborcza among others). He is also a frequent commentator on TV and radio. Leszek is an active member of the NGO community. He is a member of LYMEC – uniting young European liberals and the secretary of Transport Integration Society supporting modernization of Polish transport. He is also a member of European Convention on Liberal Democracy (ECLD).  The seating is limited to 50 guests.  The event is free, open to guests, and in English. 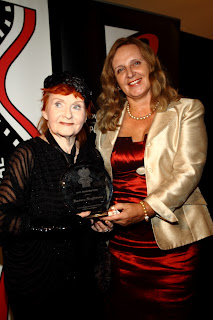 The visit of Barbara Krafftowna - Polish Film Festival and 2012 Modjeska Prize was very successful and enjoyable for everyone involved.  Many photos were taken and an album is in preparation.

The delightfully witty and charming actress "stole the show" at the Opening Gala of the Polish Film Festival  on October 9, 2012 and at the Modjeska Club Party on October 13, 2012.

TV Polonia broadcast a report by Matylda Liro about the festival including a segment about the award:
Barbara Krafftowna received her 2012 Modjeska Prize at the Opening of the Polish Film Festival in Los Angeles, at the Egyptian Theater, on October 9, 2012. Our award was the first to be given, just before the opening speeches and award ceremonies of the Festival itself. The actress, in black evening dress, complete with twenties-style jet-hat, feather boa, and fishnet stockings read a short thank you note in Polish, translated by the Emcee of the evening, Mr. Banas. It was quite a moment for us all!

On Saturday, October 13, 2012, we met again, at the hospitable home of Elzbieta and Jan Iwanczyk, in Brentwood Hills near the Getty. Our reception and interview with the 84-year old legendary actress was attended by over 100 club members and festival guests. Ms. Krafftowna showed off her prize, talked about her career, in an interview prepared with Andrzej Maleski, a long-time friend. She prepared three short "surprises" - two comic sketches first published in 1895, and a one-minute reflection on the word "Jeszcze" (still) by Professor Jan Bralczyk, also a former guest of the club.

Pictures from Barbara Krafftowna's visit to California are in our Picasa Web Album: 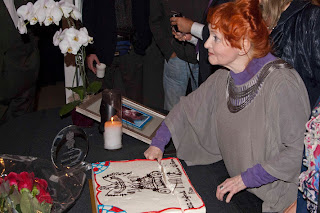 Please note that there will be no New Year’s Eve Party, since half of the Board will not be here, and there are no volunteers to organize it. For those interested, the Polish Scouts will have their “Sylwester” at the Polish Parish on Adams.

Posted by Maja Trochimczyk at 12:46 AM No comments: 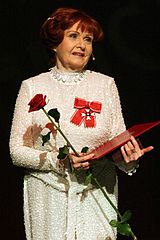 The renowned Polish actress Barbara Krafftówna is the recipient of our 2012 Modjeska Prize. The eminent actress who started her career in 1946 is celebrated for hundreds of theater, film and TV theater roles in Poland and California. She is recognized as a specialist in the theater of the absurd (Witkacy, Gombrowicz) and is beloved for her performances in cabaret, including the legendary Kabaret Starszych Panow.

The presentation of the Prize will take place at the Opening Gala of the Polish Film Festival in Los Angeles on October 9, 2012. The Modjeska Club members will then attend a special reception and an interview with the star scheduled for October 13, 2012 at a private residence in Los Angeles.

Krafftówna started her acting career in 1946, performing on the stage, on TV, in films and cabarets. Her oeuvre includes: 62 outstanding theatrical roles (in theaters in Gdynia, Łódź, Wrocław, Warszawa, and Los Angeles), 33 roles in TV theater and over 43 film roles (in such films as Wojciech Has’s – Jak być kochaną, 1962; Andrzej Wajda’s – Popiół i diament, 1958; as well as films by Jan Nowicki, Kazimierz Kutz, and others). She has specialized in the theater of grotesque and the absurd (Stanisław Ignacy Witkiewicz, Witold Gombrowicz, Eugene Ionesco, etc.). She also performed numerous cabaret and comic roles. Her contributions to Polish culture, to the history of theater in Los Angeles and to the history of Polish émigrés in California are invaluable. Barbara Krafftówna received over 20 awards and medals from the Government of Poland, such as the Commodore Cross of Polonia Restituta, Medal Gloria Artis, and more. In 1983, in Los Angeles for the title role in Mother (Matka) by Witkacy, directed by the founder of the Modjeska Club, acting coach, director, and author Leonidas Dudarew Ossetyński, Krafftówna received 11 awards from a number of critics. She has performed in three productions for UCLA Laboratory of Theater Research (Seneca's Hippolytus in 1989; A Feast at Countess Kotlubaj's in 1997 and A Meditation on Virginity in 2004--both based on Gombrowicz short stories).

Created in 2010, the “Modjeska Prizes” were previously awarded by the Helena Modjeska Art and Culture Club to Polish actors Jan Nowicki, Anna Dymna and Marian Dziędziel. Ms. Krafftówna will be the guest of the Modjeska Club and simultaneously of the Polish Film Festival in Los Angeles where her films will be screened. The Modjeska Prize is named after Polish actress who settled in California, Helena Modrzejewska (1840-1909). 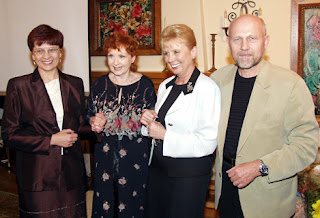 Krafftowna at the Modjeska Club in 2003, L to R:
Krystyna Kuszta, Barbara Krafftowna, Jolanta Zych, and Tadeusz Podkanski.
The event took place at the residence of Joanna and Andrzej Maleski.

To see pictures from Krafftowna's visit to California in October 2012 visit our Picasa Web Album:

Posted by Maja Trochimczyk at 6:24 PM No comments: