Forgotten Ancient and Medieval History of Poland by Janusz Bieszk on Zoom, January 15, 2022 at 12 pm PST 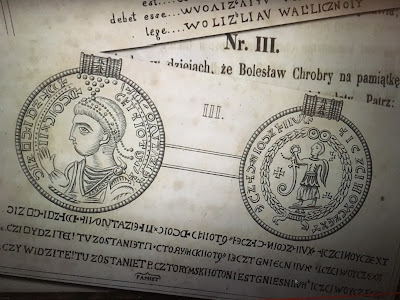 Helena Modjeska Art and Culture Club is pleased to invite you to a lecture on Saturday, January 15, 2022 at 12 noon in California. Please send requests for a Zoom link and detailed information to prezes@modjeska.org.

Lecture by zoom January 15, 2022, noon in California, Gdynia - Los Angeles. The entire presentation will be in Polish. 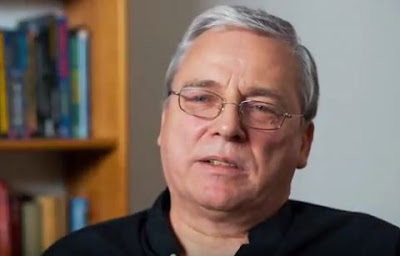 Janusz Bieszk, born in 1948 is a history enthusiast and researcher, and  a bibliophile. He holds a master’s degree in the field of foreign trade and foreign service. For many years, he worked in managerial positions in Poland and abroad. With a passion for forgotten history he pursued his interests for decates and included the results of his independent historical research in a series of popular books describing the following historical periods:

3. The Middle Ages - Castles of the Teutonic State in Poland and

Mr. Bieszk also edited the introduction and footnotes to the new edition of Prokosz's Slavic-Sarmatian Chronicle from the 10th century, Polish edition.

He documented his books with citations from an extensive Polish and foreign bibliography. 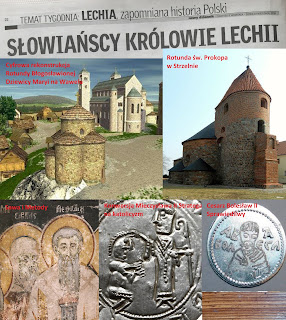 Mr. Bieszk cordially invites you to experience together and discuss the documented stories about our great and outstanding ancestors of the Aria-Praslavians, the kings of Lehia, the knights of the coat of arms Leh and the steadfast sailors of Weneds.

As the introduction to the lecture, Maja Trochimczyk will show a photo with all published books by the author, and a 3-min YouTube video under the title "The Lehia Empire and its Capitals  through the ages. Mr. Bieszk will provide comments to this introduction.

III. Sections of the lecture:

3. Slavs or Slawianie as an agricultural, peaceful, free and religious people

4. Religion and beliefs of the Pra-slavians

6. The oldest artifacts and facts

- the oldest image of a freight car

- inscription on the tombstone from the 1st century AD

7. A short and full set of Sarmatian-Lehitic kings

8. The kings of the Weneds

11. Catalog of coins minted by the rulers of Lehia

The presentation will conclude with presenting Mr. Bieszk’s three Open Appeals to the national authorities followed by participants' questions and discussion. 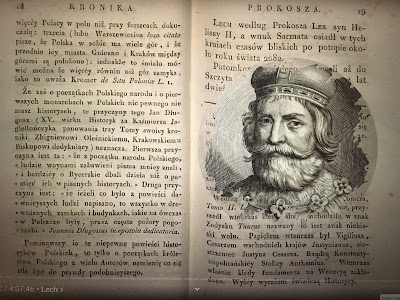 19th Century edition of the Prokosz Chronicle with inserted portrait 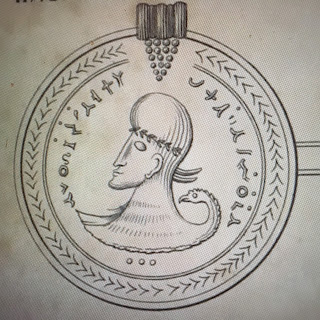 - Do you think that knowledge about the ancient history of Poland is hidden? What is the reason for this?

Everything points to the fact that we still have a post-church history and a pro-church history, where many topics, events, facts and even historical figures like kings are taboo.

1. The above-mentioned tombstone with a dedication from Emperor Tiberius Claudius, translated from Latin and published in 1843 by Polish researcher, archaeologist and numismatist Tadeusz Wolański, who studied our ancient history.  Wolanski considered Prokosz Chronicles of the 10th century to be true history of ancient Poland.  In 1853 the Roman-Catholic Church declared his books forbidden and burned them at the stake. His conviction was prevented by the intervention of Tsar Nicholas I, who also assigned a detachment of the Russian Army to protect him during his research travels and expeditions.

It is long overdue that a faithful copy of the ancient Roman tombstone of a Lehia prince should be exhibited for the public at the Royal Castle or the National Museum, as the oldest artifact concerning Kings of Lehia dating back to the 1st century

2. Lehia and Sarmatian warriors were engaged in many battles with the Roman legions, and plentiful evidence exists in historical sources;  however, it is not disseminated.

3. The reign of the Lehite king Wrocisław in the years 892-896 is not known or publicized while it pre-dates the Piast dynasty by 70 years. The evidence in the chronicle of Prokosz and the Aventinus annals is ignored.

4. The existence of the empire of Lehia in the years 1000-1038 is also ignored, despite the evidence contained in Polish and foreign chronicles and annals.

5. The reign of Bolesław II the Forgotten in the years 1034-1038 is not known to today’s historians and readers.  He was removed from the Roman Catholic Church and thus doomed to oblivion.  His “deletion” from Polish history remains to this day, so the Church’s anathema has been quite effective. His name is not mentioned in two historical albums published in Poland in 2014 and 2015 with lists of kings. 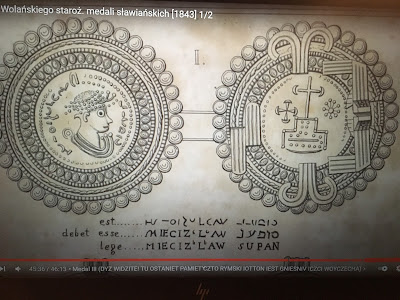 Q: When do you think Poland was baptized?

A: According to Polish and foreign historical sources, the baptism of the people of Lehia was not a single act that took place in 966 AD, but a multi-stage act, involving both  the Roman-Catholic and Eastern Orthodox, Slavic (Cyril-Methodian) rites. Its chronology was as follows:

1. During the reign of King Koszyszko (842-862) on January 1, 845, fourteen Lehs - Lehite princes and magnates, with their courts, army and people living in the south, on the border with Moravia and Bohemia were solemnly baptized in the Roman Catholic rite. Baptism was performed by priests with Archbishop Adalram from Olomouc in Great Moravia, who was subordinate to the Archbishopric in Passau, Bavaria. The above act had a practical and tactical goal, namely to avoid the future military invasions of Christianization by the aggressive East Frankish state.

2. In the middle of the 9th century, especially during the reign of King Ziemowit the Reformer (862-892) and with his consent, the Christian religion in the Eastern Orthodox, Slavic rite began to penetrate the population of Lesser Poland. It was taught by the priests of Wisnog and Oslaw, students of Archbishop Methodius, who was in Velehrad in Great Moravia. The bishop of Lehites at that time was Sawa, a student of Cyril. Religion in the Slavic rite later spread to Lesser Poland, Silesia and Greater Poland, covering a large area of ​​Lehia. Many Orthodox churches were built in such localities as Wiślica, Kraków, Przemyśl, Wrocław, Poznań, Ostrów Lednicki (Lechicki) and Gniezno.

This was confirmed by archaeological excavations. The archbishopric of the Slavic rite in Krakow functioned for over 150 years.

3. Some kings of Lehia and their courts and attendants were baptized in the Eastern Orthodox, Slavic rite and ruled together for over 100 years as Christians. In my opinion, they were:

The first king called Mieczysław ruled in 340-388. According to Polish chronicles and annals, Mieczysław II died in 999. Mieczysław II was elected as king of Lehia at a valid rally in 957, retained the title of king in accordance with the custom (now the so-called protocol) until his death in 999, regardless of the later repercussions related to the transition with his surroundings from the Slavic rite to the Roman rite.

It probably happened in or after 968, because in the so-called in the epitaph of Brave it is written that Bolesław was born in 967, of a "pagan father". This is because the Roman clergy did not recognize the Slavic rite and treated it as paganism. Mieczysław II was baptized by the aggressive German Church, not the Czech one, as there was no archbishopric in Prague at that time.

The official date of baptism of a part of the population of Polania (Poland) should also be backdated to the year 845, but then the public would have to be informed that the use of the later date was purposeful and was designed to hide the existence Lehs - because that is what they are called in foreign sources. 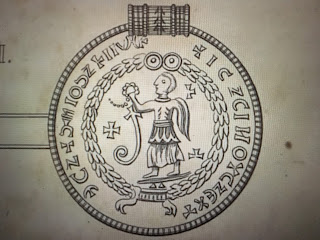 Ancient Polish medal from the book about Tadeusz Wolanski's discoveries, 1842 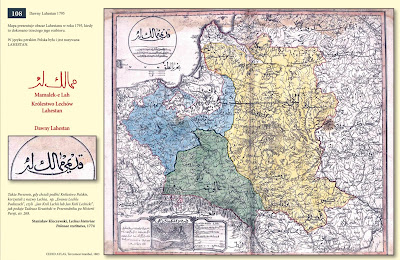 Ancient map - in arabic marking the Kingdom of Lechia 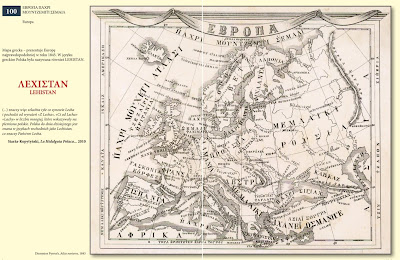 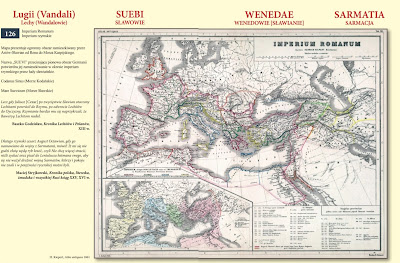 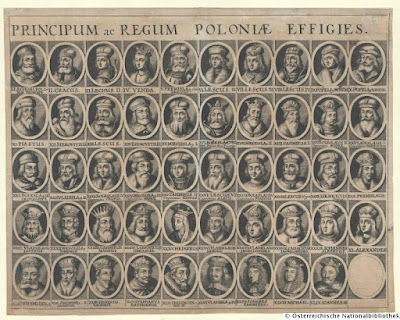 Polish Kings from an Austrian print 1655, many Lechia kings. 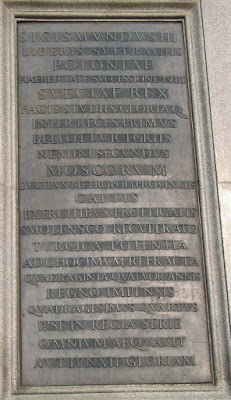 Inscription of Zygmunt III Waza column in Warsaw, by his son Wladyslaw IV, naming Zygmunt III as the 44th king of Poland; chronology goes back to 5th century and includes many Lechia kings. 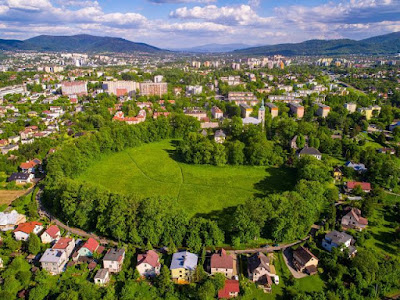 Traditional circular layout of a Lechia Slavic village with central grounds for meetings. 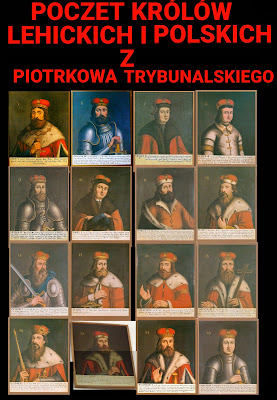 Remnants of 55 portraits, 36 extant, of Lech and Polish kings.

Portrait of earliest Polish kings in Kralow, with Krak. Popiel, and Wanda
Posted by Maja Trochimczyk at 6:39 PM No comments:

Let me start my holiday wishes for the members and friends of Helena Modjeska Art and Culture Club with a quote from the great 13th century Persian poet, Rumi: “Wear gratitude like a cloak and it will feed every corner of your life.” Gratitude is the most uplifting of emotions; counting the blessings is the key to happiness.

Among many moments to be grateful for this year in the Club, we had a beautiful caroling party with about 70 guests sharing “oplatek” wafer, special home-cooked dishes, and singing Christmas carols together in the beautifully decorated and welcoming home of Jola and Alex Wilk in Anaheim Hills (December 12, 2021). Henryk Chrostek and Olivia Kierdal led the carol sing-along. 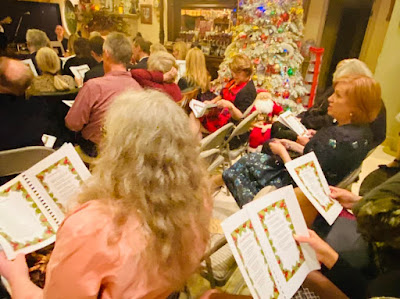 Christmas Carols: https://youtu.be/otMQr9_ZACc
For those who could not get there, on Saturday, December 18, 2021 we organized an international meeting by Zoom: Joanna Sokolowska-Gwizdka from Austin, Texas, gave a richly illustrated lecture about the holidays with Helena Modrzejewska, our club’s patron. There were guests from Texas, Florida and Canada (Agata Pilitowska, winner of our Helena Modjeska Prize 2019) and from Poland (Janusz Bieszk, whose lecture on Lechistan and Lechitach will be held by Zoom on January 15, 2022 at 12 noon).

For those who missed the lecture, here’s the link: 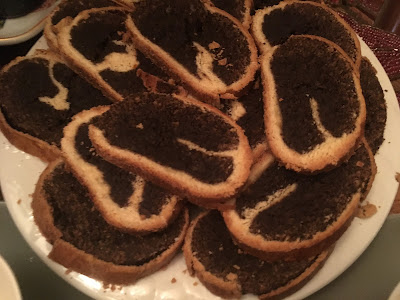 Holidays are a great time to “feed on gratitude”— that is to cook and share “once-a-year” dishes, based on Grandma’s recipes, passed on through generations. Some of this traditional food is pretty weird to outsiders from other cultural traditions. I find that even my Polish  American friends in California do not have the same menu of Christmas dishes that I carried with me here, as sacrosanct rules for life, recipes for dishes I must cook once per year, or else there is no Christmas… “Kompot” anyone? “Kutia”? “Kapusta z grzybami”? “Karp w galarecie”? Everyone has their least favorite Polish traditional dish… 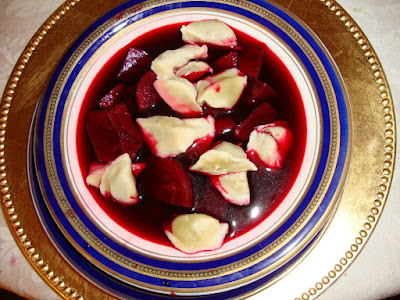 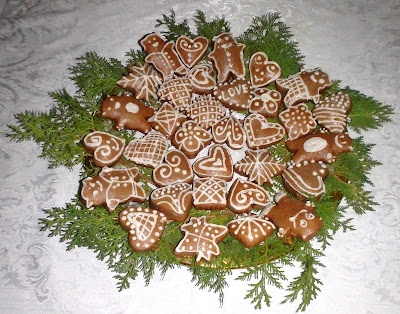 My friends came from different parts of Poland and do not share those traditions that I am so attached to, though we share our history, language, culture… Yet, we all cherish what's most important about celebrating holidays together: family love expressed without words, by cooking together, laughing together around the kitchen table.  These gifts of companionship and contentment are priceless; they are far more important than anything that money can buy. I tried to capture those feelings in many poems over the years. Today, I’d like to share a holiday poem with all Phoenix House staff and friends as my wishes for Happy Holy Days of many shared delights and blessings! 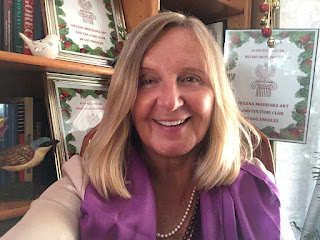 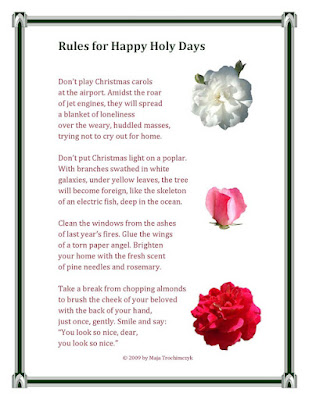 Don’t play Christmas carols
at the airport. Amidst the roar
of jet engines, they will spread
a blanket of loneliness
over the weary, huddled masses,
trying not to cry out for home.

Don’t put Christmas light on a poplar.
With branches swathed in white
galaxies, under yellow leaves, the tree
will become foreign, like the skeleton
of an electric fish, deep in the ocean.

Clean the windows from the ashes
of last year’s fires. Glue the wings
of a torn paper angel. Brighten
your home with the fresh scent
of pine needles and rosemary.

Take a break from chopping almonds
to brush the cheek of your beloved
with the back of your hand,
just once, gently. Smile and say:
“You look so nice, dear, you look so nice.” 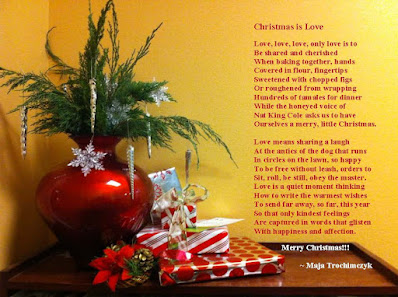 Good News
Did you know that Christmas
is Love, Love, Love, only Love
to be given, shared, cherished?
When baking together, hands
covered in flour, your fingertips
sweetened with chopped figs,
or roughened from wrapping
so many tamales for the family
dinner, while the honeyed voice
of Nat King Cole asks you to have
yourself a merry, little Christmas—
Love means sharing a laugh
at the antics of the dog that runs
in circles on the lawn, so happy
to be free—without leash, without
orders to sit, roll, obey the master.
Love is a quiet moment of writing
the sweetest of wishes to be mailed
far, far away—this year even further.
Love is this letter, filled with affection,
your kind, gentle words that glisten
with happiness & warmth.
(C) 2018 by Maja Trochimczyk
. 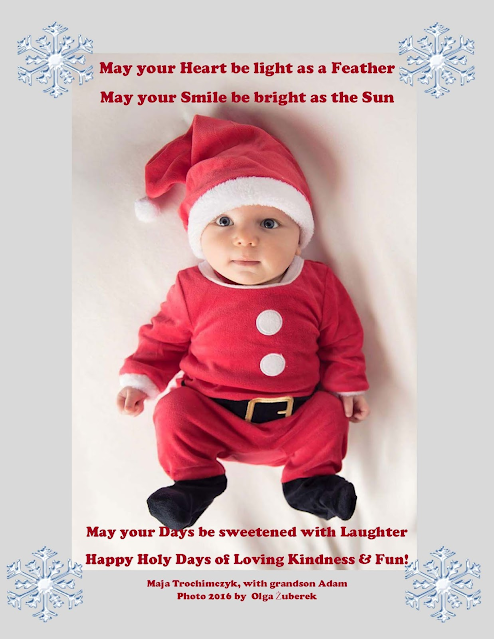 Posted by Maja Trochimczyk at 9:16 PM No comments: