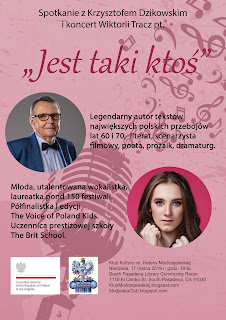 The next meeting of the Helena Modjeska Art and Culture Club is a concert "There is someone like that" [Jest taki ktos] -  an interview with Krzysztof Dzikowski, song writer of the greatest Polish hits of the 1970s and a presentation of the hits with his texts by Wiktoria (Victoria) Tracz, a young vocalist who is working on the recording of her first CD. The event will take place in the South Pasadena Library Community Room on Sunday, 17 March 2019, at  6 pm. This program is partly supported by the Ministry of Foreign Affairs of the Republic of Poland, and the Consulate General of Poland in Los Angeles. 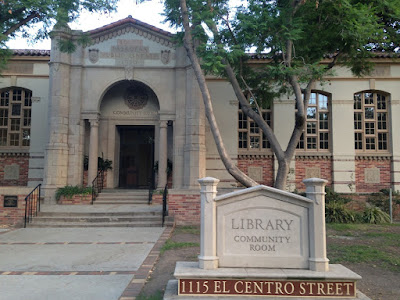 After the conversation and the concert, we invite you to a glass of wine and desserts. Despite the funny name, the room is beautiful and stylish, in a building from the 1920s, surrounded by old trees of a small park. Address: 1115 El Centro St, South Pasadena, CA 91030, parking on the streets. The concert is an event open to the public and, according to the rules of the Community Room, the admission is free for all. RSVP to Maja Trochimczyk at prezes@modjeska.org.  Due to the historical status of the building, however, you cannot serve "dark" drinks like coffee, tea or red wine ... 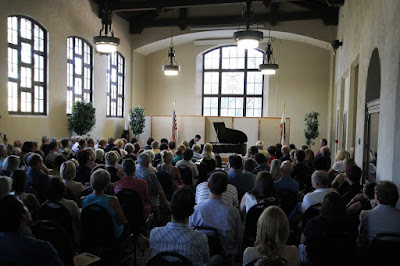 KRZYSZTOF DZIKOWSKI
Lyricist, poet, culture activist
Krzysztof Dzikowski - songwriter, screenwriter, writer (poet, prose writer, playwright). He studied at the Warsaw University of Technology, graduated in Polish philology, screenwriting at the Film, Television and Theater School in Łódź, and the Warsaw School of Photography. He continued his postgraduate studies at the Warsaw School of Humanities. He wrote lyrics for the greatest hits of 60s and 70s of Polish popular music. Awarded with the Silver Medal of Merit for Culture Gloria Artis, the Honorary Award of the President of the Board of Polish Television S.A. , as well as "Icons of the Festival" for participation in Opole festivals, the Honorary Medal of the ZAIKS Association and the Golden Cross of Merit awarded by the Minister of Culture and National Heritage.

Krzysztof Dzikowski made his debut during his studies as the author of the Tragedia wydrwigroszów, in which he also appeared as an actor. He was passionate about theater, so when the Dramatic Theater of the Warsaw University of Technology (Politechnika Warszawska)  needed actors to present The Wedding of Mrs. Du Barry, he applied and was admitted to the group of young artists. After the closure of the Dramatic Theater, he became involved in the Stodoła Cabaret debuting on the stage with the monologue Eurydice's Hands. He also performed, among others as Achilles in the parody of Achilles and the Miss (1953), and this role was highly praised by Artur Maria Swinarski. In the years 1961-1963 he became the literary director of the Stodoła Cabaret. 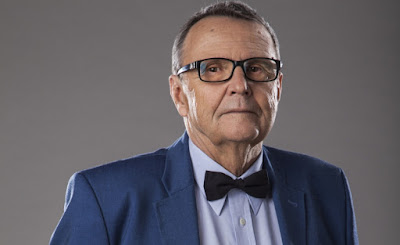 Krzysztof Dzikowski holds a diploma from the State Film School (PWSTiF) in Łódź. During his studies, he wrote two film scripts for the Film Group X - Hanged and  Scream louder  (Krzycz glosniej). For the latter he won the the 1st prize in the Young in Film Competition in Koszalin in 1981. In the years 1963 - 1965 he joined the Student Club Hybrydy. For this cabaret, he wrote together with Wojciech Młynarski the scenarios for programs Joyful Mouth of Stabilization and People Buy It. He also created a libretto for musicals, including Mismatched, or Goliath the Whale (also together with Wojciech Młynarski).

As a lyricist, he made his debut in 1963. At that time, he established a collaboration with the music group of Tajfun, and later also with Czerwono-Czarni. He achieved the greatest successes as a songwriter for the rock band Czerwone Gitary. Songs with lyrics by Krzysztof Dzikowski can be heard by the best Polish artists, among others: Czesław Niemen, Maryla Rodowicz, Niebiesko - Czarni, Trubadurzy, Kasia Sobczyk, Anna German, Halina Frąckowiak, Irena Jarocka, Krzysztof Cugowski, Ewa Bem, Alibabki, Jerzy Polomski, Ludwik Sempoliński, Urszula Sipińska, Halina Kunicka, Karin Stanek, Tadeusz Chyła, Krystyna Janda, Wojciech Gąssowski, Anna Maria Jopek and Anna Wyszkoni. Krzysztof Dzikowski has worked for many years with the Polish Radio's First Program. He managed, among others, the broadcast program of the Songs of Facts (Piosenki Faktu). It featured songs that described real events. The programs also included interviews with well-known artists who wrote such songs (Wojciech Młynarski and others).

Dzikowski's songs enjoyed great popularity among listeners, as evidenced by the need to reprint the book The Little Prince by Antoine de Saint Exupéry by the PAX Publishing shortly after the premiere of the song of the same title written for Kasia Sobczyk. In turn, the song The First Day  of the Year is often sung in Polish homes during Christmas, as one of new carols. His text Sunrise in the Horse Farm was published in the World Anthology of Poetry about Horses. Dzikowski is also the author of literary translations of plays by G. Moustaki and Tennessee Williams. 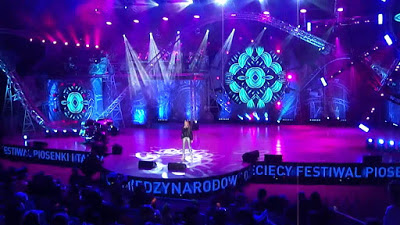 Wiktoria Tracz born 26/11/2002 in Nowy Sącz is a young vocalist who feels good in pop, pop rock, R &B, Dance pop, Soul. She began her musical career in 2011 as a nine-year-old girl. She is a graduate of the State Music School of Fryderyk Chopin in Nowy Sącz and currently is studying music and performance at the famous BRIT School in London. Wictoria was invited to several Polish television programs, including: Pytanie na Śniadanie, Petersburski Music Show, etc. She has won many prestigious awards at festivals in Poland and abroad, including: UK, Denmark, Italy, Germany, Georgia, Belarus, Malta, Macedonia, Slovenia and Bulgaria. Since 2016 she has been working with Krzysztof Dzikowski and composer Marek Yan Kisieliński.

Her first singles are Winter Ball and Teenage Girl. Recently, she also began to compose songs, and wrote text for the song Czekaj. Wiktoria was a semi-finalist of the 1st Edition of The Voice Kids program in 2018, where she was on the Tomson and Baron team. The song Beat Is Off is the newest single produced by the Delphy Records label, for which she produced a music video herself. Recently, Wiktoria had the honor to perform with the legendary band of the first Czerwono Czarni on the occasion of Krzysztof Dzikowski's Jubilee. 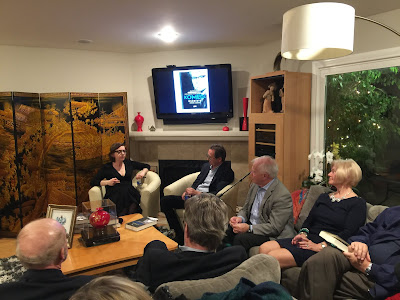 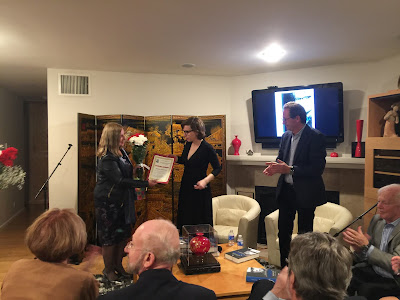 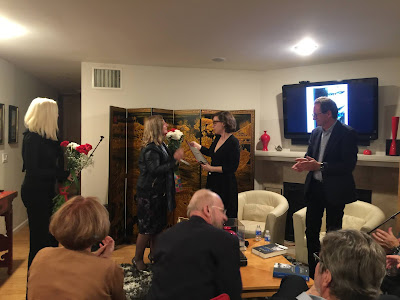 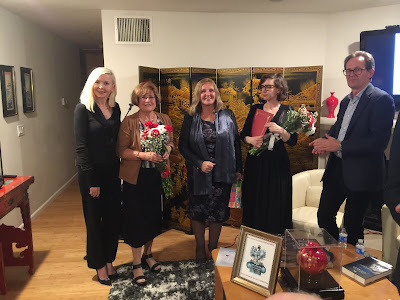 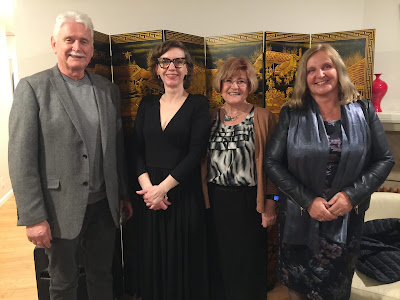 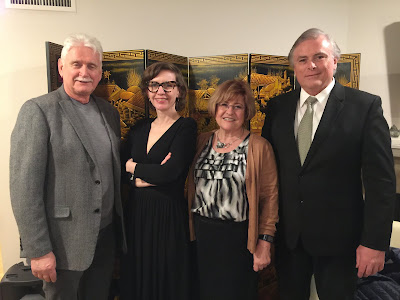 
Photos from the camera of Chris Justin. Thank you!

Posted by Maja Trochimczyk at 10:17 AM