We cordially invite Modjeska Club members and friends to the first club meeting of 2019 with prominent artist Monique Lehman Chmielewski and the owner of the Hellada Gallery, Marek Dzida. It will take place on January 12, 2019 at 6:00 pm, at the Hellada Gallery, 117 Linden Ave, Long Beach, CA 90802. The number of places is limited, first come, first serve, so please RSVP to VP Witold Sokolowski by January 8, 2019 at witold.sokolowski@modjeska.org.

Monique Lehman is the creator of fascinating fiber art, with original aesthetics and a great technique. Her works have been exhibited in solo shows and large exhibitions around the world, most recently in China, Uruguay and the Ukraine. They are also found in many collections of important museums and American, Polish and Chinese institutions. In the Hellada Gallery, we will hear about her creative ideals and we will see selected works. For many years, Marek Dzida has run the Hellada Gallery, where he holds lectures on the reception and creation of fine arts and presents many exhibitions. The theme of his presentation in Hellada will be "The Art of Seeing."

Save the dates for the next meetings: 3 February (Duet Piramidy from Poland at Playa Vista), 17 February (Writer Magdalena Gorzalkowska in West Hills) and 17 March (Krzysztof Dzikowski and Wiktoria Tracz at South Pasadena Library). 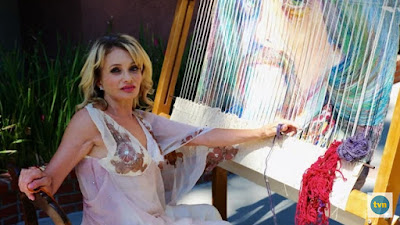 A native of Warsaw, Poland and a graduate of the Warsaw Academy of Fine Arts, Monique Lehman is an accomplished and original tapestry artist whose work may be found in museum collections around the world (the Vatican, Long Beach Museum of Art, Central Museum of Textiles in Lodz, Poland and the Space Museum in Cape Canaveral, FL), as well as in many American public buildings, city halls, churches, hospitals and synagogues. Her creative output continues the centuries of development of unique fiber art tradition, previously unknown in America and created exclusively by Polish artists. 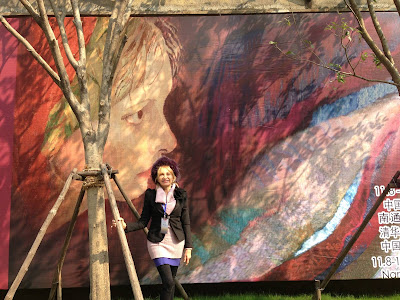 Monique Chmielewski came from Poland to USA in 1978 invited by an American artist to teach at her studio in California. When the Pope John Paul II visited Chicago, Monique greeted him by presenting his portrait she wove as a 6’ x 4’ tapestry. Since the American TV showed this event on the news, the public learned about the Polish tapestry school. 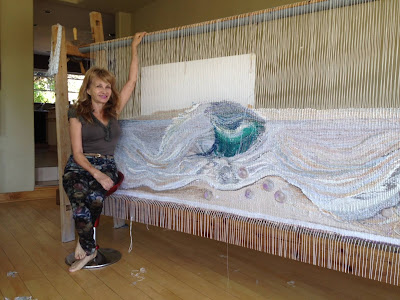 Working on a tapestry at home

Monique was invited to lecture about art and soon Polish tapestries became desirable objects for American collectors. Ms. Lehman, a member of Zwiazek Polskich Artystow Plastykow, shares her time between exhibiting, working on large commissions, and organizing art shows for artists from China in Poland and Polish artists in American and China museums. She is a real ambassador of Polish Fiber Art. Her knowledge of languages and cultures help her to promote Polish art in Asia and the Americas. This year she was invited as a special guest to World Textile Art in Uruguay and Biennale of Art in Karachi, Pakistan. 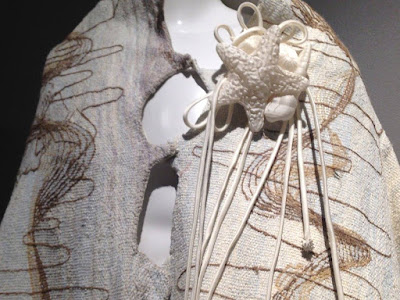 Monique’s accomplishment is bringing European visual criteria to America and China, as well as sharing Polish culture. Her monumental tapestries such as the parochet for Temple Beth El, La Jolla, CA, or the Portrait of St. Francis, typically take several years to complete. The large-scale works created on commission are just one side of her creative talent. She also developed an original style of abstract tapestries, that are three dimensional, may change shapes, and have a rich palette of colors and textures to express their themes.

Since 2010, she participated in 29 prominent international exhibitions on four continents (Asia, North and South America and Europe), including exhibitions held in: Ottawa and Vancouver, Canada; Oaxaca, Mexico; Beijing and other cities in China; the Lodz Triennale, and many other exhibitions in Poland (Bytom, Czestochowa, Gdynia and so forth), as well as Long Beach, Palos Verdes, Ontario, and Pasadena in California. She was recently invited to show her fiber art as a solo artist in Montevideo, Uruguay, during the WTA Conference in October 2017, and will hold a Retrospective Exhibition in the Museum of Textiles in Beijing, China, in the following year. 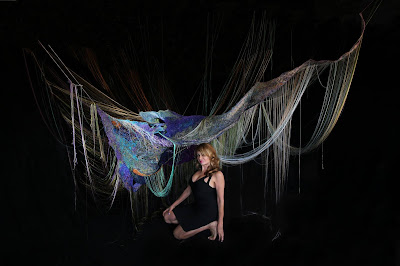 Lehman with her Rain Forest tapestry

She promotes tapestry art by organizing international shows in Europe, China and the U.S. One of her internationally exhibited projects with contributions by 100 artists from 20 countries was the Memorial Tapestry commemorating the victims of 9/11. Monique’s goal was to promote polish art not only in the USA but internationally. The artist participated in many Contemporary International Fiber Art Exhibitions and served as a jury member since 2006. For her achievements in the field of fiber arts, Monique Lehman received an honorary degree of Professor from Zibo Vocational Institute, in the city of Zibo, Shandong Province, China. She included many Polish artists in the largest Fiber Art show in Asia,“From Lausanne to Beijing.” She is a judge of this show and invited eminent Polish professors to join her in selecting the work for display. 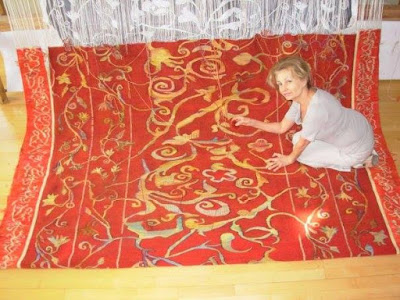 Working on the tapestry for La Jolla Temple Beth El.

Her unique passion is Wearable Art. In February 2017, she received a prize for her artwork at the International Exhibition of Wearable Art in Palos Verdes, Monique promotes this type of art which was first invented by Polish art students, who could not buy fashionable or original clothes in the 1970s so they made their own. Her biography will be available for purchase and signing during this event.

Born and raised in Poland, Dzida emigrated to the US in 1990. His European education includes high school and university in the subjects of high mathematics, chemistry, electronics, film and visual art. In the U.S. he received a college degree at the LBCC, Long Beach, in the profession of Photography. Since 1996, the owner of Hellada Gallery, presently located on 117 Linden Ave. Since 1998, he has been the manager and organizer of the 2nd Saturday Art Walk in Long Beach, an art fair on Linden Ave. Since 2000, he has been organizing the annual photography exhibition, Exposure. From 2012 to 2016 he has served on the board of director of (CALB) Cultural Alliance Long Beach.

Dzida is active as a community leader and art activist. The growth of Downtown Long Beach is very important for Marek’s personal and professional adventures. Working with the community in shaping the future of Long Beach would be a creative concept, which will enrich everyone.

As a photographer, he has worked with many subjects in the task of illustrating all personal resources and inspirations in the artistic process: from discoveries in natural environment to explorations in human behaviors through all possible interactions between the two. Art-works consist of silver prints on paper created through traditional Black & White photography techniques.
Posted by Maja Trochimczyk at 2:25 AM