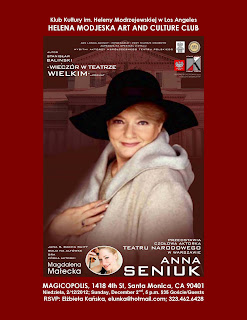 On December 2, at 5:30 p.m., at Magicopolis Theater (1418 4th St, Santa Monica, CA 90401), the Modjeska Club will present Anna Seniuk in a play by Stanislaw Balinski, "Wieczor w Teatrze Wielkim," with live music by Magdalena Malecka. Reception to follow by Moonrise Press and Friends.

PLEASE NOTE THE CHANGE OF THE HOUR! We will have access to the theater only at 4:30 p.m. and have to set up the stage and reception areas.

Anna Seniuk (born November 17, 1942 in Stanislaviv) is a Polish TV and theatre actress. After World War II, together with other Poles from Stanisławów, she was forced by the Soviet government to leave her hometown, settling in the town of Zator, near Oświęcim. In 1964 Seniuk graduated from Państwowa Wyższa Szkoła Teatralna (Academy for the Dramatic Arts) in Kraków and debuted in the renowned Helena Modrzejewska Theater (Old Theatre). In the early 1970s, she moved to Warsaw, where played in several theatres.

Since 2003, she has been working in Warsaw at the National Theatre. Seniuk is known to Polish viewers mainly for her role of Magda Karwowska in the immensely popular 1970s Polish TV series Czterdziestolatek (The Forty-Year-Old). She has cooperated with Polish Radio and has been featured in more than 40 radio shows. Among her most famous film roles, there are appearances in such productions as Europa Europa, Potop and The Maids of Wilko.

Stanislaw Balinski was a poet, essayist and diplomat, born on August 2, 1898 in Warsaw. He also studied Law and Musical Theory and Composition at the University of Warsaw. He was a member of the famed and notorious poetic society, "Skamander" that remained active during the Second World War in spite of the dangers under Nazi occupation. After the war, Balinski chose to make London his home; he died there on November 12, 1984.

Stanislaw Balinski's 'Evening at the Grand Theatre' is a comic and sentimental homage to the artist's and musician's of his time - that of prewar Warsaw. The Romantic Poet tells of a time when Theatre was likened to Religion and the tremendous importance and reverence the Theatre had in society. Anna Seniuk masterfully engages her audience in this comic and endearing spectacle that illuminates a remarkable epoch in Polish Theatre. Polish community will undoubtedly recognize this performance as the season's finest; it is highly entertaining and touches on very relevant themes about art and society in Poland. This is a subject of great interest to the Polish community, on that will no doubt be very much appreciated.

A MESSAGE FROM CRITICAL MASS ABOUT AMERYKA

Cześć!  My name is Valerie Spencer, and I’m a member of Critical Mass Performance Group.  I’m reaching out to members of the Southern California Polish community to spread the word about our latest theatre piece, AMERYKA.

It’s a kaleidoscopic look at the centuries-long relationship between the United States and Poland with an emphasis on the Revolutionary War period, the Cold War period, the 1980s/Solidarnosc era, and post 9/11.  The piece has been in development since 2010, and we’re about ¾ of the way there.  Occasionally we invite members of the public to take a peek at the work while it’s still under construction, and I’d like to let you know about some upcoming showings:


Posted by Maja Trochimczyk at 8:39 AM